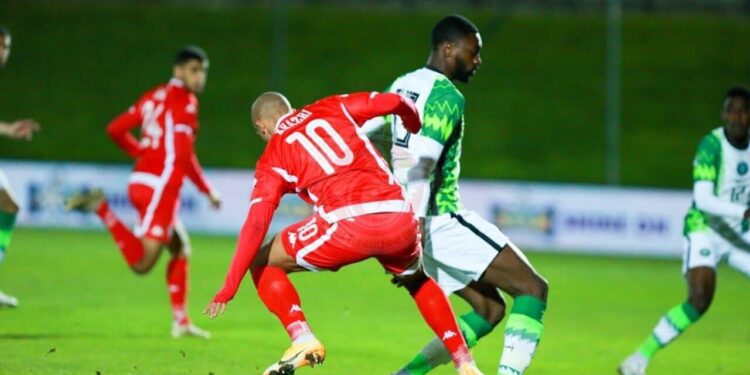 The Super Eagles of Nigeria were back in action Tuesday evening at the Jacques Lemans Arena in Austria for their second International friendly in 4 days as they came up against familiar opponent, the Carthage Eagles of Tunisia. The Last time both sides met was at the 3rd place match of the AFCON 2019 in Egypt, which Super Eagles won to claim a 3rd place bronze medal finish at the tournament.

Super Eagles head coach Gernot Rohr made five changes to the side that played the last match, he decided to go with a more experienced line up this time as compared to the starting lineup that executed the last Friday’s International friendly against the Algerians and its was Kelechi Iheanacho leading the line while the ”gangling striker ” Paul Onuachu  dropped to the bench  and  the captain Ahmed Musa playing off  him to the left and Moses Simon on the right.

Everton’s  Alex Iwobi kept his place  in the middle at the central attacking midfield area to drive the team forward and Semi Ajayi was in the central defensive role, The back 4 was made up  of  the return of Leganes centre back Kenneth Omeruo in central defence to partner Leon Balogun as his usual partner Trost Ekkong  had been allowed to return to England  to link up with his  new team, Championship side Watford, While Zaidu  Sanusi who impressed at right back at the last game, kept his place team, Hoffenheim  defender, Kevin Akpoguma got the nod to start and Sparta Rotterdam ” safe hands ” Maduka Okoye was retained in goal.

Villarreal’s Samuel Chukwueze was lively in the early exchanges as he got the earliest chance to get Super eagles ahead but missed as his shot was way off target.

Leicester City Striker, Kelechi Iheanacho got the Super eagles ahead in the 20th minutes when he used his strength to shield a Tunisia  defender off with his back to goal, made a nice turn before finding the top corner of the North African’s goal with his left for a sublime well taken goal to make it 1-0 in favour of the of the Nigerians, his first goal for Super Eagles in three years.

The lead would have been doubled just moments afterwards as  an on rushing Al Shabab FC goalkeeper Farouk Mustapha collided with Ahmed Musa and the Super Eagles were awarded a penalty  kick which Kelechi Iheanacho stepped up to take but was denied by the Tunisia keeper, a  poorly taken penalty as he tried to play a cheeky one, he hesitated before he took the penalty kick and it was a tame effort and an easy save for the goalkeeper.

The game became an end to end story for a while as both sides had stints to get the next goal, Super Eagles look slightly the better side for a moment just before the half  but Tunisia would later get  the equaliser as a ball into the box was put behind Omeruo who came out second best allowing Rafia Hamza to square the ball into the box for Olympiakos’s Mohamed Drager who was arriving into the Super Eagles’ box to pounce on to level matters 1-1 just before the break for Tunisia.

The Second 45 was more of a very cagey encounter as both sides played with a bit caution as Gernot Rohr seem to be contented in keeping the score line decent and was more interested in making subs and handing players game time and debuts.

Ranger’s new acquisition, Loen Balogun who was having a decent game covering and making important blocks at the back for the Super Eagles was subbed off for Boavista’s Chigozie Awaziem in the 56th minute in a defensive change and Paderborn’s Jamilu Collins was next to be thrown into fray to replace Porto’s Zaidu Sanusi in the 65th minute in another defensive substitution.

Ahmed Musa who was making his 93rd cap for the Super Eagles gave way for Cyriel Dessers, the Genk of Belgium striker who came on the 71st minutes to make his Super Eagles debut, Chidera Ejuke 22-year-old CSKA Moscow Strikercame on for his debut as well in the 78 minutes.

Ejuke seem like a very lively addition to the side as his close control of the ball at his feet making lovely runs and going past the Tunisian defense but he didn’t release the ball soon enough and that was his undoing twice when he got the chance to drive at the defenders. Both teams struggled to find a way through in the 2nd half but Mondher Kebaier’s men kept making attempts and the got close on an instance where Maduka had to make a crucial safe to deny a lobbed attempt over the top at his goal.

It ended all square as both side hanged on to their 1 goal apiece, the performance was a bit of an upgrade and an improvement on the game against Algeria as we saw flashes of brilliance in the team’s organisation and general play and hopefully we can bounce back to winning ways next month when we have qualification at stake and it’s a more competitive match.

Its on to the next one for the Super Eagles at the AFON qualifier match against the Leone Stars of Sierra Leone in November 2020. 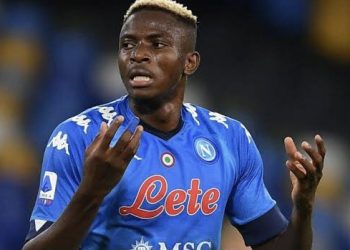