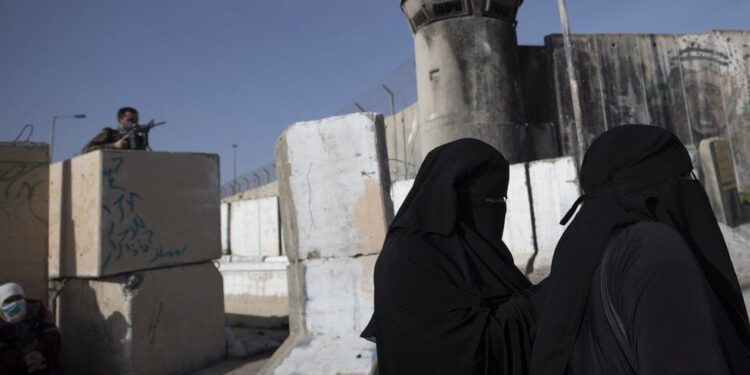 Israel is committing the crimes of apartheid and persecution against Arabs in the occupied territories and Israel itself, Human Rights Watch says.

In a new report, it says Israel has a policy “to maintain the domination by Jewish Israelis over Palestinians”, including those who are its citizens.

Apartheid amounts to state-sanctioned racial discrimination and is considered a crime against humanity.

Israel’s foreign ministry has rejected the report as “preposterous and false”.

It accused the international campaign group of having a “long-standing anti-Israeli agenda” and carrying out an ongoing campaign “with no connection to facts or reality on the ground”.

“It is urgent for the international community to intervene, including by making sure that their states, organisations, and companies are not contributing in any way to the execution of war crimes and crimes against humanity,” he said.

Israel occupied the territories in the 1967 Middle East war. It pulled out of Gaza in 2005, but still controls most of its borders, as well as its airspace and waters off its coast.

More than 600,000 Jews live in about 140 settlements built in the West Bank and East Jerusalem. Most of the international community considers the settlements illegal under international law, though Israel disputes this.

Human Rights Watch’s 213-page report, entitled A Threshold Crossed, states that the present-day reality is that Israel is the sole governing power throughout most of those areas and that in the remainder it exercises primary authority alongside limited Palestinian self-rule.

“Across these areas and in most aspects of life, Israeli authorities methodically privilege Jewish Israelis and discriminate against Palestinians,” it says.

“In pursuit of this goal, authorities have dispossessed, confined, forcibly separated, and subjugated Palestinians by virtue of their identity to varying degrees of intensity. In certain areas… these deprivations are so severe that they amount to the crimes against humanity of apartheid and persecution.”

Apartheid was a policy of racial segregation and discrimination enforced by the white minority government against the black majority in South Africa from 1948 until 1991.

Human Rights Watch says that apartheid today is a universal legal term, and that the prohibition against particularly severe institutional discrimination and oppression that go with it constitutes a core principle of international law.

The 1973 International Convention on the Suppression and Punishment of the Crime of Apartheid defines apartheid as “inhuman acts committed for the purpose of establishing and maintaining domination by one racial group of persons over any other racial group of persons and systematically oppressing them”. The 1998 Rome Statute to the International Criminal Court (ICC) adopts a similar definition.

“Denying millions of Palestinians their fundamental rights, without any legitimate security justification and solely because they are Palestinian and not Jewish, is not simply a matter of an abusive occupation,” said Kenneth Roth, Human Rights Watch’s executive director.

Human Rights Watch says the ICC’s chief prosecutor should investigate and prosecute those credibly implicated in the crimes of apartheid and persecution.

The group also urges the international community to re-evaluate its relationship with Israel and to establish a United Nations commission of inquiry to investigate systematic discrimination and repression in Israel and the Palestinian territories.

Last month, the ICC’s chief prosecutor opened a formal investigation into alleged war crimes in the West Bank, East Jerusalem and the Gaza Strip since June 2014 following a request from the Palestinians.

Israel insisted the Hague-based court lacked the authority to open a probe and that it would refuse to co-operate with it.

But Gerald Steinberg, founder of the Jerusalem-based group NGO Monitor, told the BBC that the report was part of a “vindictive vendetta… against Israel as the nation state of the Jewish people”.

He also said Human Rights Watch had chosen to “completely ignore and erase deliberately decades of terrorism and the need for counter-terror measures”.