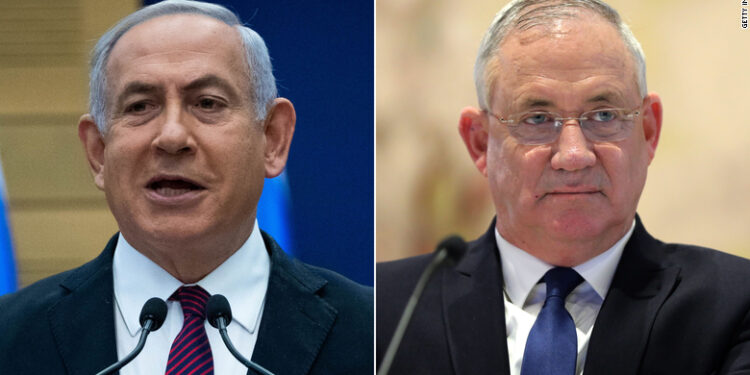 Prime Minister Benjamin Netanyahu (left) and his coalition partner, Blue and White leader Benny Gantz (right), sought to blame one another for the collapse of their seven-month-old government.

The Israeli government collapsed on Tuesday at midnight (17.00 EST) local time after the country’s parliament failed to meet a deadline for passage of the 2020 and 2021 budgets. Israel will now head to its fourth elections in two years, probably on March 23 next year.

Prime Minister Benjamin Netanyahu and his erstwhile coalition partner, Blue and White leader Benny Gantz, sought to blame one another for the collapse of their seven-month-old government. “Blue and White withdrew from the agreements [to modify the original coalition agreement] and dragged us to unnecessary elections during the corona crisis,” said Netanyahu, who on Saturday evening became the first Israeli to receive the Covid-19 vaccine. “We do not want an election and we voted against it … but we are not afraid of elections — because we will win!”

Gantz, referencing the corruption charges facing Netanyahu, said: “I regret that the Prime Minister is preoccupied with his trial and not the public interest, and is prepared to drag the entire country into a period of uncertainty, instead of ensuring economic stability and a rehabilitation of the economy.”

After three inconclusive elections, and with the first wave of the coronavirus pandemic underway, Gantz agreed to join Netanyahu in April, in what was described as an “emergency” coalition government – even though he’d campaigned on a platform that ruled out sitting with the Prime Minister while he faced corruption charges.

Under the deal, the prime ministership would have been rotated between the two party leaders: Netanyahu would serve first, and then give way to Gantz after 18 months. The only loophole in the complicated deal was if lawmakers failed to agree to a budget before Tuesday’s midnight deadline — a failure that has now come to pass.

The fate of the government had appeared sealed after the Knesset failed in the early hours of Tuesday to pass a bill at first reading that would have extended the deadline for reaching a budget agreement.

Opposition leader Yair Lapid — who campaigned with Gantz at the last election, but ​withdrew his party’s support when ​Gantz joined forces with Netanyahu — addressed the Israeli leader in the Knesset on Monday evening: “Mr. Prime Minister, who are you kidding? You don’t care about the mutation [of coronavirus]. You only care about the rotation [of the prime ministership].”

Opinion polls suggest Netanyahu’s Likud party is again on track to win the most Knesset seats in the next election. With Blue and White hemorrhaging support, his biggest rivals would appear to come from other right-wing parties, which have been gaining ground on Israel’s longest serving leader.