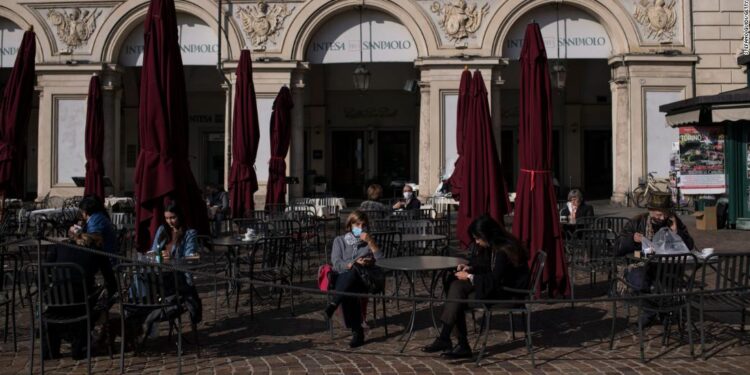 The Italian regions worst-hit by the second coronavirus wave entered a new lockdown Friday after the country tallied its highest daily number of both infections and deaths the previous day.

Italy is under a 10 p.m. to 5 a.m. nationwide curfew, with bars and restaurants closing at 6 p.m., while certain areas face harsher restrictions.

Residents in “red zone” regions — Lombardy, Piedmont, Valle d’Aosta and Calabria — may only leave home for necessities, health or work. Those in “orange zones” are banned from leaving their towns except for work or health reasons — and bars and restaurants are closed except for delivery and takeout. 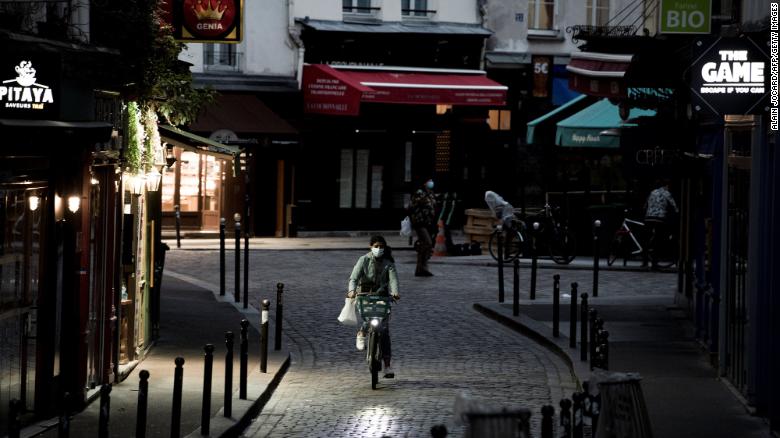 A woman rides a bike along an empty street in the district of St. Michel in Paris on November 3, the fifth day of France’s lockdown.

These figures “are not a good sign,” said Gianni Rezza, director of the prevention department at the ministry. “The virus is running and we have to stop it.”

In neighboring France, Paris also announced stricter measures as the country reported a record 58,046 new cases Thursday, according to the French health agency. The country has Europe’s highest case number, at 1.6 million infections.

From Friday, food delivery, takeout and alcohol sales are banned in Paris between 10 p.m. and 6 a.m., police said.

“The second wave is already upon us, and it is brutal,” French health minister Olivier Véran told a news conference Thursday. If the virus keeps spreading at this rate, he said “the second wave could be worse and longer” than the first, and could take “until mid-December” to stabilize.

Véran urged people to respect the national lockdown, or face “a high risk of saturation” of hospitals by mid-November.

People will need to text the authorities before leaving home and high schools will close.

Denmark also announced new restrictions in seven municipalities after scientists identified a mutated strain of the coronavirus linked to the mink population. According to the government, the mutated form of the virus has been passed back to humans from the small mammals.

All mink in the country will be killed because of the concerns over a mutation of the virus, the country’s Prime Minister Mette Frederiksen said Wednesday.

Danish cafes and pubs will close from Saturday, along with indoor sports venues, cultural centers and public transport, and people should avoid travel outside their area.

A UK government adviser told CNN that Raab was “informed that an individual with whom he has been in recent close contact with has tested positive,” as England entered a month-long second national lockdown.

Löfven said a person in his vicinity came in contact with someone with Covid-19 but had tested negative. 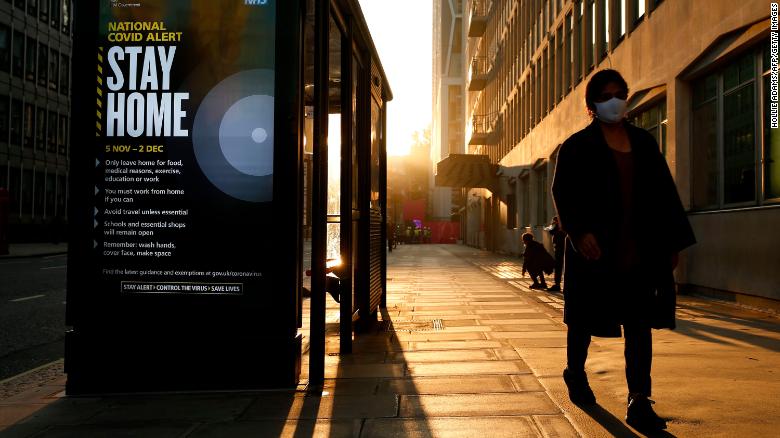 A pedestrian wearing a mask passes a digital display in London showing the new measures as England enters a second coronavirus lockdown on November 5.

“The development is going in the wrong direction quickly. More are infected. More people are dying,” Löfven wrote on Facebook.

Earlier this week Sweden announced it will tighten restrictions in three additional regions, including limiting gatherings in bars and restaurants to eight people.

Austria and Poland also both reported record case rises Thursday as Austria entered its second national lockdown this week, which includes an 8 p.m. to 6 a.m. curfew and the closure of leisure facilities.

Norway, which has one of Europe’s lowest infection rates, has seen a “sharp rise” in cases, according to the Norwegian Institute of Public Health.

Norwegians were urged to “stay at home as much as possible” from Saturday as countrywide restrictions were announced, including bars and restaurants closing at midnight and more remote learning.

Prime Minister Erna Solberg warned of a “very serious” situation, adding, “we must act now to avoid a new shutdown as in March.”

Bent Høie, the Norwegian health minister, said that if current trends continue “it will create major challenges for our health service, as we see happening in country after country in Europe.”