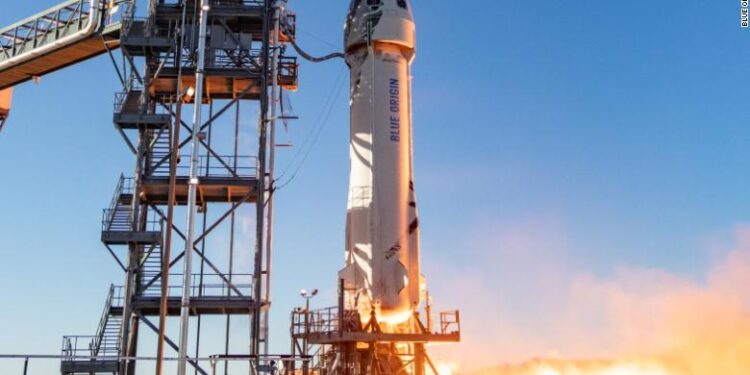 Blue Origin, the rocket venture founded by Jeff Bezos, launched its space tourism rocket from its West Texas test site to the edge of Earth’s atmosphere on Tuesday, marking the first test flight of the rocket in nearly a year.

It marked the 13th test flight of New Shepard, as the vehicle is called, but it still has yet to fly with humans on board. Blue Origin wants to eventually send paying customers on brief joy rides to the edge of space, but the company has not started selling tickets, nor has it announced a price. So far, the vehicle has only carried science experiments and, at one point, a test dummy nicknamed Mannequin Skywalker.

During a webcast of the test flight Tuesday, Blue Origin CEO Bob Smith said only that the company is “very close” to being ready to fly humans.

New Shepard consists of two pieces — a small, dome-shaped capsule with gaping rectangular windows, and a 60-foot-tall rocket booster that blasts the capsule up to three times the speed of sound as it hurtles toward outer space. The capsule is designed to detach from the rocket near the top of its flight path, climbing more than 60 miles high and spending a few minutes suspended in weightlessness before parachuting back to Earth.

New Shepard flew multiple experiments for NASA during its Tuesday test launch, including a sensor mounted to the rocket booster’s exterior that was designed to study how future spacecraft might conduct more precise landings on the lunar surface.

The New Shepard booster was designed from the beginning to help Blue Origin develop lunar technology, Bezos told a crowd during a presentation about Blue Origin’s Blue Moon lunar lander program in 2018.

Blue Origin is also designing a much larger rocket, named New Glenn, that the company hopes will deliver cargo and satellites into orbit, a much more difficult and higher speed journey than the short, suborbital endeavors New Shepard undertakes.

But for all of Blue Origin’s plans for futurist space technologies, the company is often seen as an underdog in the commercial space exploration scene, where Elon Musk’s SpaceX dominates headlines. While Blue Origin, founded in 2000, has never sent humans to space or put a rocket in orbit, SpaceX, a younger company by two years, is launching massive batches of satellites, sending astronauts to the International Space Station, and test flying a Mars rocket prototype.

Blue Origin’s leadership, however, says it’s all by design. The company’s mascot is a tortoise, meant to symbolize it’s dedication to go as slowly as needed and never cut corners. It’s by many accounts the opposite of the culture at SpaceX, which embodies the Silicon Valley ethos of moving extremely quickly and embracing mistakes as learning experiences.

Both Blue Origin and SpaceX have close ties to NASA, though SpaceX has won billions more in government contract money over the years.

And both companies are planning to work closely with the space agency on its plan to return astronauts — two people, including the first-ever woman — to the Moon.

Most Illegal Miners in Nigeria Are Foreigners - FG