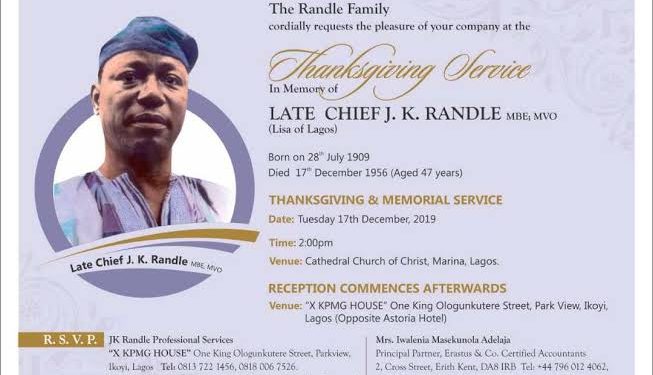 The 65th thanksgiving anniversary in memory of late Chief J.K. Randle, will hold today at the Cathedral Church of Christ, Marina, Lagos.

The family of the deceased disclosed this in a statement on Thursday.

According to the statement, the Lisa of Lagos was only 47 years old when he died shortly after his return from the Melbourne, Australia, Olympic Games where he was the Chef-De-Mission of the Nigerian Team.

The statement read, “He was a titan in business; a legend in sports; and a colossus in philanthropy (in his life time and beyond).  Randle Road, Apapa; Randle Avenue, Surulere; JK Randle General Hospital, Surulere; Randle Secondary School, Apapa and Chief J.K. Memorial Hall at Onikan, Lagos were named after him.

“He was an old boy (and School Captain) of King’s College, Lagos and when he ventured into politics, he demonstrated exemplary patriotism and selfless commitment in the service of the nation in various spheres of human endeavour.

“He was a prolific bridge-builder whose friendships recognised neither race nor religion – or gender / generation. He was a champion of youth empowerment.”