The All Progressives Congress across the country on Saturday, held its state congress to elect new executives to steer the ship of the party in the next three years.

In Lagos State, the exercise was held in an atmosphere described as; “seamless and peaceful.”

A former Commissioner for Rural Development, Mr Cornelius Ojelabi emerged as state Chairman, while Mr Sunmi Odesanya was elected as party Secretary in a consensus arrangement.

The exercise which was held at Mobolaji Johnson Arena, formerly Onikann Stadium, Onikan, had 1,615 delegates participated in the voice election.

Lagos State Governor, Mr. Babajide Sanwo-Olu, led other personalities at the event held under the supervision of the Independent National Electoral Commission (INEC) and Electoral Committee members appointed by the party’s National Caretaker Committee of the APC in Abuja.

The congress commenced at 11 am, following the opening speech of the chairman of the State’s Congress Electoral Committee, Chief Adebayo Adelabu, who promised objectivity, fairness and equity throughout the process.

The congress committee members adopted voice voting, requesting card-carrying members to nominate each of the eligible aspirants for members’ approval. The exercise was supervised by the Secretary of the State Congress Committee, Ambassador, Anthony Ogba.

He commended leaders of the party, led by Asiwaju Bola Tinubu, who he said was in communication with him during the exercise to know how it was fairing “and assured him it was moving well.

He said: “We have come to the end of the State congress. All party members are happy with the peaceful conduct of the process and the outcome. I’m certain that the leadership that emerges from this exercise is a round peg in a hole.

The man (Ojelabi) that will be leading the team has a brilliant resume as a trusted hand, at the National Assembly level, State Executive Council level, political and community leadership level. He has over 20 years of political experience.”

Sanwo-Olu dismissed parallel congresses allegedly held by some elements as “mere naming ceremonies”, saying the authentic congress was the one attended by card-carrying members of the party at the venue announced by the State Congress Committee and supervised by INEC and the party national executive committee.

The Governor said the new chairman had the mandate to reach out to aggrieved party members and bring them back to the fold in order to move the party forward.

“It’s a big shoe left behind. On behalf of all, I formally congratulate the new chairman and able team.  The female gender is well represented, it shows the quality of our party.

“Indeed the team will take everyone to enviable national level. God will help you all,” he said.

Chairman of National Congress Committee, Mr Bayo Adelabu commended the delegates for conducting themselves in an orderly manner during the conduct which elected Ojelabi as chairman and other 35 executive members after delegates ratified their nominations.

In his acceptance speech, Ojelabi promised to consolidate the achievements of his predecessor with the promise to set the party on a higher pedestal.

While praising Tinubu and other leaders for counting his team worthy, gave assurance that he would work along with other executive members to mobilize members of the public to register in the ongoing Continuous Voter’s Registration in order to boost the chances of the party in the forthcoming elections.

He said: “On behalf of all new executive members of the party, I give our commitment to setting our great party in a higher pedestal. All hands must be on deck, as this is a crucial moment in our political endeavours in Lagos. It is a moment other States are looking forward to.”

Ojelabi thanked the past caretaker committee members for their service, especially their effort to grow the party membership and its reach.

Ogba, however, commended the party in Lagos for solid organisation, urging other states to emulate the Lagos example.

Earlier, in what seemed to be a lingering silent crisis in the party, the leadership of a group within APC in Lagos,  Lagos4Lagos, held a parallel congress at the Airport Hotel, Ikeja, while another group loyal to the former governor of Lagos, Akinwunmi Ambode, held a congress somewhere around Obanikoro area of the state.

At the Lagos4Lagos congress, Sunday Ajayi was elected chairman and Bode Makinde as Secretary.

Reacting to his election as the state chairman, Ajayi said, Impunity has ended with the conclusion of the state congress by the group.

“Today Impunity is over in Lagos APC. There’s no more ‘Baba sope.’”

He, however, explained that the Lagos4Lagos has set the pace for others to follow.

“You can all see that they cannot do anything until their father returns.

“With what we have done today, the journey has just begun.

“It’s because of what we have done that they picked their own chairman from my local government in Ojo and my ward. I have watched their chairman very closely, Cornelius Ojelabi, he can not aspire for anything, that’s why they picked him.

“This will not in any way deter us. He can not say who will be the candidate for governorship in 2023. We have our destination and we have to work towards it.

“Our destination is to be the governor of Lagos state in 2023. If we put in more effort, they will give us the governorship ticket,” he said.

Jandor, therefore, pleaded with the newly elected state executive committee to be accommodating in order to achieve the objectives of the APC. 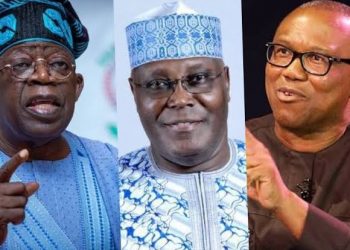