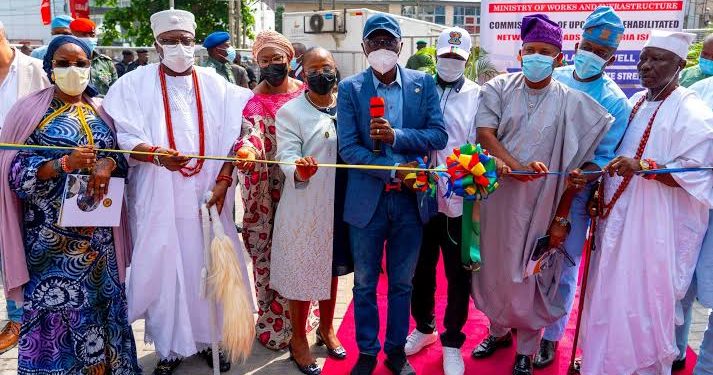 Lagos State Governor, Babajide Sanwo-Olu, has commissioned a newly reconstructed network of three interconnected roads in the Central Business District (CBD) of the Eti-Osa axis of the state.

The project is part of the urban infrastructure renewal programme of the Sanwo-Olu administration, which seeks to improve vehicular mobility within and around commercial districts in the State.

Before the upgrade of these roads, commuters groaned in pain while traversing the axis, as the 3 roads were impassable due to perennial flooding occasioned by low line drainage. This resulted in heavy traffic and reduced commercial activities.

Sanwo-Olu said the completion of the roads validated his faith in his campaign pledge to improve the quality of life of the residents and engender socio-economic growth through the delivery of requisite infrastructure.

He said: “As a responsive government that is committed to fulfilling our electoral promises, we took the necessary decision to address and reverse the issue of incessant flooding and all its consequences in this area. Failure of some drainages and water channels in Victoria Island has consistently impeded the free flow of traffic, extending commuting time, causing damage to vehicles and low patronage for businesses.

“In February 2020, our administration awarded the contract for the reconstruction of the three roads and their upgrade, taking cognizance of the need to improve the drainage network, as well as the need to provide good connectivity with other roads in the vicinity. Today’s commissioning fulfils our promise and clearly demonstrates our audacious reforms in critical sectors of our economy, in line with our T.H.E.M.E.S Agenda.”

Sanwo-Olu said the three rehabilitated roads form a ring-like pattern that will smoothly discharge traffic into Sanusi Fafunwa Street and connects back to Adeyemo Alakija Street.

He said: “I am confident that these newly completed roads will significantly reduce travel time, improve inter-connectivity with other roads within the vicinity and further boost business and investment opportunities in this area. The positive effects of this infrastructural upgrade will no doubt be felt well beyond Victoria Island.

“We seek road users’ continued support to ensure that these roads, upgraded with our commonwealth, are judiciously used and maintained. Anyone whose action may compromise the integrity of these roads and undermine their durability must be reported to the authorities. It is our collective responsibility to protect public infrastructure; doing this will free up government resources to do even more.”

Special Adviser to the Governor on Works and Infrastructure, Engr. Aramide Adeyoye, revealed that the state government maintained high standards and quality assurance in the course of the projects, noting that the roads would serve their purpose.

She added that other accompanying benefits of the reconstruction included a reduction in the cost of maintenance of vehicles, enhanced property value and improved socio-economic activities.

Recall that in February last year, Governor Sanwo-Olu awarded the full reconstruction of the 3 roads with drainage channels in the area, in order to bring relief for residents and businesses who had been negatively impacted by the worsening state of that road.

The projects are part of the current administration’s focus on urban renewal and development of road infrastructure to enhance the collective well-being of the residents.

The state government had some months ago commissioned 4 roads in Ikoyi under the infrastructure renewal scheme and is presently at an advanced stage of completing 4 roads in Ikeja GRA.