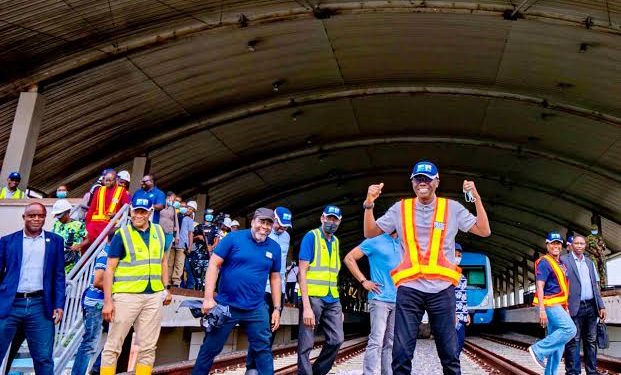 Many Lagosians are excited about the project, saying they are eager to see the state have the most iconic mass transit system.

They said the commencement of the line would further lighten up the corridor from vehicular movement, as people would opt for the train service.

Lagos State Governor, Babajide Sanwo-Olu, had said that a test run of the Blue Line train service will start in late December 2022, as the state government is committed to delivering the project before the year ends.

Sanwo-Olu said this at the celebration of the launch of the last T-beam for the blue line rail mass transit project.

He added that the two trains bought in China for the project will arrive in Lagos in October.

However, the Lagos light rail project has failed to see the light of the day, several years after it was born amid high expectations.

The governor said that his administration is committed to the citizens to see that the project is completed on time, especially as it will continue to meet deadlines.

He further said that his administration is on a journey and not just making promises but working to ensure that the trains’ commercial operation starts in the first quarter of 2023 as earlier promised.

For the governor, the launch of the last T-beam is historical, because it signposts that the blue rail line project would be delivered on schedule.

According to Sanwo-Olu, the T-beam that was launched was the 984th for the Blue line rail project.

But residents say they wait in eagerness to witness the test run, as this will spur development within the axis.

A resident at Orile Iganmu, Kamoru Oseni, said if eventually it comes on board, it will ease traffic congestion.

“People leaving Orile for Agbara will enjoy it without holdup. People with cars would be able to leave their cars at home and join the train. It is a laudable project.

“But it is up to the government to deliver as promised to ensure effective usage of the tracks. Many people who witnessed the start of these rail projects have died. Government needs to hasten up the operations of the rail system,” he said.

Another resident, Emeka Nwuzor, however, said cautiously, ‘let’s wait and see if it will work.’

Nwuzor said: “people don’t believe in them anymore. The rail bridge has been constructed for long without use. Let’s hope it will come to pass by December.”

A resident of Amuwo Odofin Estate, Mile 2, George Simeon, said the light rail would ease the traffic congestion being faced by motorists on the Okokomaiko and Apapa axis because passengers would find it as an alternative means of transportation.

Simeon revealed that most countries were rated as developed because of the availability of projects in major cities, adding that the rail project will add more to the rank of Lagos as the best city in Africa.

“The blue line is a major one. The spinal cord of Lagos State is the axis between Badagry to Epe. What the blue line would do is to solve traffic on that main axis, but it is a segment of it now. Marina to Mile 2, then Okoko and Agbara eventually they should get to Badagry.

“Once you do that, three things will happen. They are: de-flooding the traffic into the waterways, you have the rail and you now have 12 lanes of road. Lagos can look like a paradise when that happens.

“It is just that it is taking a bit too long. But there are other things Lagos is coordinating with the Blue line. The Green line is for the Lekki side, especially the Lekki Deep-sea coming up. Then they are working on the red line. The red line is being synchronised with the Federal line, which is the smartest thing to do. So, once those three take-off, latest by the first quarter of 2023, there would be a massive relief,” he said.

Chief Executive Officer, West Atlantic Cold-Chain and Commodities Limited, Henrii Nwanguma, said it would be a fantastic Christmas present to long expectant Lagosians. That is a landmark project that will change the face of transportation forever in Lagos.

Nwanguma said: “It has been in the incubator since the government of Alhaji Lateef Jakande. We should now begin to benchmark per kilometre costs of transportation (and building, I daresay) to be the most competitive in these parts.”

Tinubu denies ownership of Oriental Hotel, other assets linked to him in Lagos

Tinubu denies ownership of Oriental Hotel, other assets linked to him in Lagos