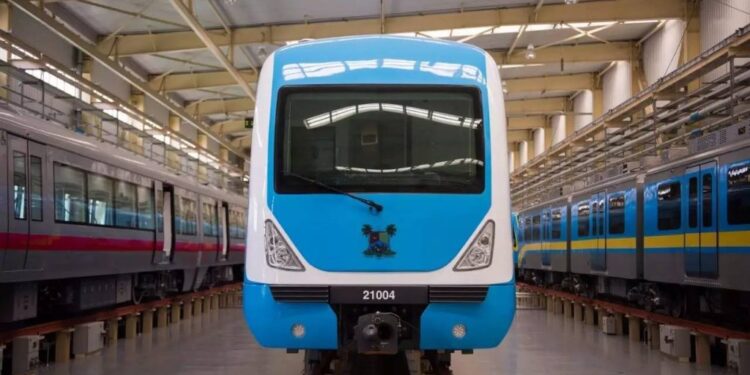 Lagos State Government has disclosed that the first phase of the blue rail-line project running from Mile-2 to Marina axis has achieved 80 per cent completion rate.

According to LAMATA MD, the state is currently constructing the infrastructure for the Blue Line, which would run from Marina, Lagos to Okokomaiko while the Redline, whose construction is to begin soon, will share tracks with the Lagos – Ibadan Rail Modernisation project of the Federal Government and are expected to move more than one million passengers daily.

“The first phase of the Blue rail line – Mile 2 to Marina – has achieved about 80 percent completion rate while the remaining works involve construction of the Marina rail station, completion of piers with the lagoon and retaining walls,” she said.

While briefing the committee, Akinajo stated that the state government has a Strategic Transport Master Plan, LSTMP which details six rail lines and one monorail, 14 Bus Rapid Transit, BRT routes, three cable car projects and over 20 water routes for implementation.

Akinajo informed that the state government under the Bus Reform Programme, BRP, would inject over 2,000 buses and encourage the development of a bus assembly plant to cater for the needs of the state’s

Also, she stressed the vision of Lagos State Governor, Mr. Babajide Sanwo-Olu as contained in the first pillar of the T.H.E.M.E.S. developmental agenda, which is: Traffic Management and Transportation.

The main strategy of the administration, according to Akinajo, was to harness both public and private investment in the development of transport infrastructure, provision of rolling stock and operations.

She underscored urgent need for the commencement of implementation of the two interchanges at Mile 2 and Marina to meet the timelines for the operations of the first phase of the Lagos Rail Mass Transit, LRMT, Blue and Red line projects projected for the fourth quarter of 2022.

Adewale, while announcing the endorsement of the state house of Assembly of Governor Sanwo-Olu’s vision to have two rail lines operational by 2022, said the committee was in LAMATA as part of its oversight functions.

Describing the transport planning authority as a focused organization, he pledged that the Assembly would do all within its power to continue to back Sanwo-Olu up to deliver on his mandate.

Adewale said the committee was aware of the commitment of LAMATA to providing sustainable infrastructure that would birth a world class multi-modal integrated transport system.

“There is the growing concern of daily needs of Lagosians who must move from point A to point B. From our interactions with them, we are assured that LAMATA is here to give us the solution to our mobility challenges. And the solution is very simple.

“No matter how many roads you build without thinking of how to move the people en-masse from one point to the other, all the efforts would come to naught,” Adewale stated.

He commended the LAMATA team, describing the staff as a “team ready to move the transport sector in Lagos state forward.”

Also, AFD Task Team Leader, Mr. David Margonszternd speaking during a mission of the agency’s team to LAMATA, stressed that agency was determined to support Lagos transport system and make the city competitive.

Margonszternd, explained that AFD would provide fund for two transport interchanges at Marina and Mile-2 and eight corridors for quality bus operations.

Margonszternd stated that QBCs give dedicated road space and traffic signal priority to buses in order to reduce journey times and improve service consistency with the encouraging people to change from cars to buses and thus reduce traffic congestion.

Meanwhile, Sanwo-Olu has approved a dedicated security team for the monitoring of transport infrastructure and the enforcement of extant rules on the use of the Bus Rapid Transit (BRT) regulation.

Approval for the dedicated security team followed incessant damage to transport infrastructure and violation of the BRT lanes which more often impeded the operation of the BRT system.

With more transport infrastructure being constructed, LAMATA maintained that there was the need for a higher measure of security and vigilance especially in the light of last year’s attack on the state government and LAMATA facilities perpetrated by hoodlums who hijacked the EndSARS protest.

During the attack, the newly completed Oyingbo Bus Terminal was vandalized, and 57 new BRT buses that were ready for deployment for passenger operations were set ablaze. On the same day, Berger Bus Terminal and 23 new buses parked were also set ablaze.

The approval granted by the governor states that the dedicated team, headed by a Superintendent of Police, would be composed of 70 officers and men of the Nigeria Police Force charged with the protection of existing LAMATA facilities and others currently under construction.

The dedicated security team will ensure that the lifespan of transport infrastructure would be guaranteed and not be truncated by needless and unforeseen attacks as well as make passengers feel secure at LAMATA facilities while using regulated public transport.

Airfield Officer Suspended After Near Collision Incident in Lagos Airport