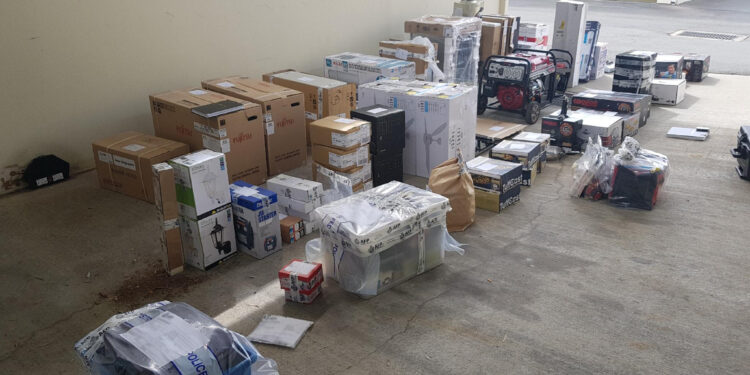 A trader at the Alaba International Market, Lagos State, Ms. Kamlotachukwu Arum, has accused local market guards of looting her shop of goods worth an estimated N65 million naira.

Arum claimed that the men also set her shop ablaze to cover up their crime.

She stated that efforts to involve the police were frustrated by the market leaders, who tried convincing her that the fire was divinely orchestrated.

Arum reported that on March 3, 2020, she received a call from one of the traders asking if she was aware that her shop had been burnt.

She said that she was surprised when she got to the scene and observed that only her shop was affected.

She said she could not find the remnant of burnt goods, which aroused her suspicion that there was more to the fire.

She said, “When I got to my shop, I discovered that things were not normal, because inside my shop, where I had about 300 units of keyboard that I just took delivery of that week, there were no scraps or remnants of the goods. The few scraps were only arranged along the line of the shops but there was nothing inside my shop. The upper part of my shop, where I kept my goods, looked as if it was swept; so, I smelt a rat and rushed to the Ojo Police Station that night and an officer followed me to the market.

“According to report, seven security guards were on duty that day and they did not report the incident to the police or the fire service; they also did not inform anyone in the market when the alleged incident was happening. It was when I called the market’s CSO that he informed the chairman.

“The chairman called when he got back to invite me to his office and when I got there, he said he and the elected officers had interrogated the security guards on duty and that his position was that I should take whatever decision I wanted to take to get to the root of the matter.”

Uyghurs are being deported from Muslim countries, raising concerns about China’s growing reach