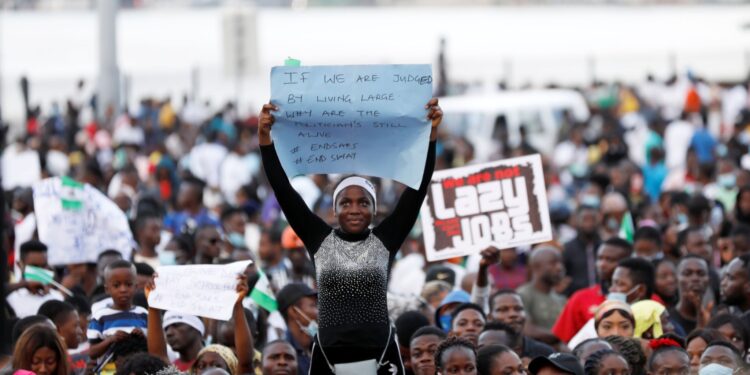 The management of Loatsad Promomedia Limited has come out to state that the electronic billboard at the Lekki Toll Plaza of Lagos was turned off prior to Tuesday night’s shooting on EndSARS protesters, to aid its workers conform to the curfew imposed by Governor Sanwo-Olu.

Protesters who survived the attack said lights in the area were turned off deliberately to provide a cover for the brutal assault on peaceful protesters. Witnesses also said CCTVs were removed before the shooting.

In addition to street lights, a large electronic billboard operated by Loatsad Promomedia also illuminates the toll gate area, and the company has come under fire for switching them off on Tuesday.

The advertising agency which is owned by Oluseyi, a son of the former Lagos State Governor and leader of the ruling All Progressives Congress, Bola Tinubu, admitted that the screen was turned off ahead of the attack, but said it was not to aid the shooting.

It said, ‘‘On Tuesday when the curfew was announced we heeded the governor’s warnings and didn’t want our staff in any danger, hence by 3pm our staff had been ordered to leave the site and the board was switched off based on the governor’s curfew request’’.

‘‘We had no idea what was going to happen and we feel the same anguish, pain, and shock at the events that unfolded and our hearts and prayers go out to the victims and families of this ungodly act’’.

The agency also said it had wholly supported the EndSARS movement and provided support to the movement.

” I believe the promoters can verify this information) as we believed in the cause. When we started in 2014, we had a plan to change the perception of African start-ups in the global space. We believed as Africans, we could create something great and we set out with a N4m loan from a bank and we started trading, going from door to door begging for work and relentlessly grew the business employing and empowering over 200 Nigerians today directly or indirectly,” it said.

The firm explained that ‘‘All we operate is the billboard at this location and we have no control over the street lights or cctv’’.

⁣ ‘‘When we were approached by the organisers of the protest to help them with power, we gave them unfettered use of our generator and ensured our technical staff was physically present to control the board for their use and when the events were over he would leave at midnight’’. ⁣

Explaining why they had their staff members leave their posts as early as 3p.m. on Tuesday, the firm said, ‘‘On this occasion we were highly concerned about our staff members who live very far from Victoria Island. On no account will we have turned off our board on the same comrades we worked with throughout the entire period the protests were ongoing at the Toll plaza.’’⁣

Mr Sanwo-Olu announced a 24-hour curfew, effective 4 p.m. Tuesday, saying no one, except essential service providers and first responders, should be found on the streets.

Shortly after his announcement, there was panic on social media after photos emerged of unknown men removing CCTV cameras at the Lekki toll gate.

DJ Switch, a Nigerian artiste, who was at the location, streamed the shootings live on her Instagram page on Tuesday night.

Videos show the area was dark as the toll gates lights were turned off.

Eyewitness accounts say the toll lights were eventually turned on hours after the shootings had ceased.