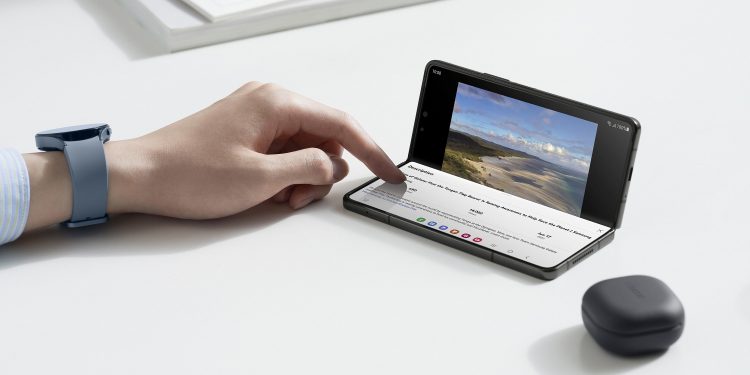 The company’s part-tablet, part-smartphone Fold line is making good on its promise to become a multitasking powerhouse.

Samsung teased on Wednesday the new Galaxy Z Fold 4, the first device to ship with Android 12L – a special version of Android created by Google for large-screen experiences, including foldables.

The device allows users to switch fullscreen apps to pop-up windows, or split screens in half. Users could also read email on one side of the screen and edit a presentation on the other side, for example. They could also run multiple apps at one time.

The Galaxy Z Fold 4 also includes new swiping gestures and a taskbar in a layout that’s similar to a PC. Moreover, it features an interactive cover screen, narrower bezels and is lighter and slimmer. It also works with Samsung’s S Pen (sold separately).

The Fold received a camera system upgrade, too, with a new 50MP wide camera lens, a 30x space zoom lens, and a handful of photo features, including the ability to take clear images at night.

Along with its new phone models, Samsung provided a first glimpse into the latest iterations of its flagship wearable device.

The sensor on the Galaxy Watch 5 is larger than its predecessor’s and covers more of the wrist to provide more accurate readings, Samsung said.

The Watch 5 Pro is meant to be a more rugged, outdoor version of the wrist-worn device, made of more durable materials with a bigger battery and specific features for hiking and cycling.

The Watch 5 comes in two sizes and four colors including sapphire, graphite, pink gold and silver, and will start at $279.99. The Watch5 Pro starts at $449.99 and is available in two colors — black and gray. Samsung will also sell a special Golf Edition of both models with direction and distance features to help golfers on the course.

The watches will be available for pre-order from Wednesday and will go on sale August 26.

Samsung gave an update on the Galaxy for the Planet initiative it announced at last year’s Unpacked event. The company said it is inching closer toward meeting its 2025 sustainability goals, which includes developing and incorporating more recycled materials into products and designing more eco-conscious packaging.

The company also said 90% of the Galaxy Buds 2 Pro is made with recycled materials. It also uses 100% recycled paper for the packing of its Galaxy S22 series line.

Samsung launched an updated version of its bluetooth earbuds.

The Galaxy Buds 2 Pro features surround sound, active noise cancellation and moisture resistance, with up to 30 hours of battery life including its chargeable carrying case.

The Buds2 Pro is available in three colors — black, white and purple — and will go on sale August 26 for $229.

Samsung’s most popular foldable phone just got a solid upgrade. The fourth-generation Galaxy Z Flip is lighter, slimmer and smarter; the company said users can expect a full smartphone experience in half the size.

The star feature of the new Z Flip 4 is the enhanced cover screen, allowing users to make calls, reply to texts, access Samsung Wallet, unlock cars and control smart home gadgets without opening up the device. The cover can be personalized with custom fonts, icons and design.

The device also features an improved camera system, with a 65% brighter lens, improved processing power and advanced artificial intelligence that enables crisper and more stable photos regardless of the time of day.

On the outside, the Z Flip 4 is built with Gorilla Glass and its so-called Armor Aluminum, a tougher metal alloy. While the device comes in several colors – graphite, purple, pink, gold and blue – its Bespoke line lets users choose from new body and frame colors, offering 75 combination options. The device is available starting August 26 at $999, the same price as its previous model.

Samsung’s Unpacked event kicked off Wednesday with a short video featuring some of the cast of Netflix’s “Emily in Paris.” The fictional advertising executives tried to come up with the next big slogan for Samsung. (For its Galaxy S22 launch, the company did a playful nod to “Bridgerton.”)

Then, in a previously taped clip, Samsung teased how its new foldable devices will be its best yet. It’s taken eight years of research and development to create the Z Fold and the market tripled in the last year, according to Samsung.

Instagram head Adam Mosseri also appeared in a short video highlighting how the popular app can work on foldable devices. He teased a feature that allows users to film content hands-free with a foldable device open.

Samsung to double down on foldable phones

At its product launch event on Wednesday, Samsung will once again make the hard sell for foldable phones. It will attempt to show that smartphones can now offer the flexibility of flipping and folding without compromising on performance or features.

Samsung is expected to announce its next-generation Flip 4 phone – which opens like a clamshell, a design reminiscent of flip phones from the early 2000s – as well as the Z Fold 4, which opens outward like a book to form a tablet.

The devices will likely get camera upgrades, a new hinge and slimmer body, and a longer-lasting battery. The Flip’s cover is rumored to get an enhanced interface, allowing easier access to notifications, widget control and wallet functionality, without needing to open the phone.

After an inauspicious start with its Galaxy Fold phone in 2019, Samsung has continued to push the concept of foldable smartphones, often at very high price points. But Dan Ives, an analyst at Wedbush Securities, told CNN Business that Samsung’s foldable efforts remain “an epic disappointment” for the company.

“This has been an Everest-like uphill climb to success on the foldable concept – design, pricing, and consumer preferences and habits make Flip and Fold a very niche segment of the Samsung base,” he said.

While the Galaxy Z Flip 4 and Z Fold 4 will be the focus of the event, the company is also expected to introduce new Galaxy watches and wireless earbuds.

The Galaxy Watch 5 series is expected to get an improved screen, faster charging and a more personalized design. The inclusion of advanced biometric sensors may also better track certain health metrics, such as sleep habits.

Meanwhile, Samsung’s Galaxy Buds are due for an update, particularly around sound quality and battery life. According to ABI analyst David McQueen, the smartwatch and earbuds sectors have performed well during (and because of) the pandemic.

“I see this continuing for the next few years,” he said.

While Apple AirPods are the leader in this category, McQueen said Samsung’s Galaxy Buds work with both iPhones and Android devices, broadening its appeal.

Samsung fans have really been spoiled for choice this year, and Wednesday’s event will bring a fresh set of options. The company has already unveiled several new smartphones across multiple price ranges, along with other gadgets and accessories.

Here’s a non-exhaustive list of the products Samsung has rolled out so far in 2022:

Barely a month later, Samsung refreshed that line with three new devices — the Galaxy S22, S22 Plus and S22 Ultra — at its first Galaxy Unpacked event of the year.

There was still more to come. A 5G version of Samsung’s lower end model, the Galaxy A53, debuted in March of this year.