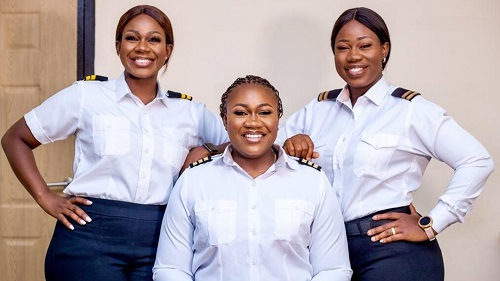 It is striking that three sisters who are pilots, and took after their dad in that regard, are billed to participate in the 2022 Lagos Women Run on November 12.

This year, the 10km road race “will be going on a loop starting from TBS, towards Awolowo Road, Falomo Bridge through Olusola down and finishing at Onikan,” according to Tayo Popoola, the coordinator of the event. “We are expecting about 25,000 runners in the categories of the elites and the fun runners,’’ she said.

The event, which has a one-million-naira prize money for the winner, transcends sports. The organisers say it provides a platform for the advancement of women in society, and describe it as one of its kind among global races. Support from the Lagos State government underlines the significance of the race.

The participation of the Makinde pilot sisters, Mopelola, Oluwaseun and Oluwafunmilayo, is good for the women’s cause. As female pilots, they will be helping to send a strong message to encourage women, and especially girls, who continue to face challenges related to negative gender stereotypes in a male-dominated environment.

”As much as I want people to learn from me, that’s me pouring out. I also want to learn from others… I am looking forward to meeting other women in other sectors to also learn from them,” Oluwafunmilayo Makinde-Marcus, a corporate pilot, said. Other women whose careers can inspire womenfolk are expected to enrich the event. Perhaps the beauty of this unique road race is its power to empower females by inspiring them to soar above gender-based limitations created by the male-controlled society.

Female pilots are still rare, especially in Africa. In 2021, only six percent of pilots globally were women, according to the Ninety Nines International Organisation of Women Pilots, the oldest group of women pilots with about 6,000 members from 44 countries worldwide.

This shows why the pilot sisters are special. Oluwafunmilayo, in particular, is different. She is a fixed-wing pilot. Her father and two sisters are helicopter pilots. She is the youngest of her parents’ seven children who are all females.

“I would run out of the house when I heard the sound of a plane… it was so beautiful to behold,” she said in an interview. That’s how the dream started, “to be a pilot of planes specifically.” Her biggest inspiration was her mother who “encouraged me not to give up on my dream despite the odds.”

After earning a first degree in Computer Science at Covenant University, Ota, Ogun State, she had a stint in the Fin Tech/ Technology sector before deciding on a career switch. She was relatively comfortable, she said, and many people who knew her were surprised, partly because she chose to move to the aviation sector. ”But a dream is a dream, and passion is passion,” she stressed. She went to flying school, and became a pilot.

Factors that contributed to her success include parental support, education, passion, determination, courage, and self-belief. This may well be true of her two sisters who are also pilots. Their stories are inspirational, and teach positive lessons.

The importance of education in the mix needs to be emphasised. On the International Day of the Girl Child on October 11, the United Nations notably observed that “Girls around the world continue to face unprecedented challenges to their education.” The situation is grave in Nigeria, which is said to account for more than one in five out-of-school children anywhere in the world.

The international body advocates engagement with government officials, policymakers and stakeholders ”to make more targeted investments that tackle inequalities experienced by girls.” It also calls for engagement with “key female influencers across industries to be the face of change we want girls to see as possible.”

The three pilot sisters can be seen as positive role models. It is commendable that they are playing a noteworthy role in advancing the women’s cause in Nigeria.