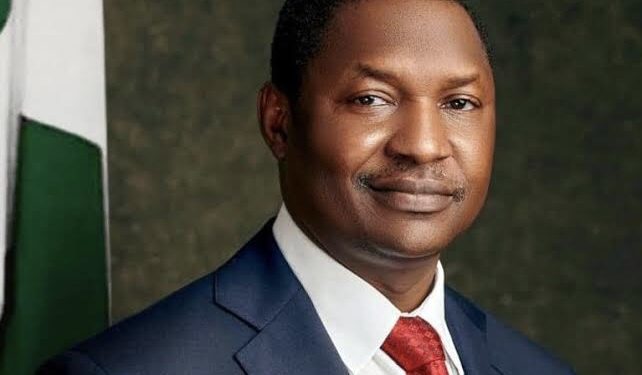 Nigeria’s Minister of Justice and Attorney-General of the Federation (AGF), Abubakar Malami, has pulled out of the Kebbi State governorship race.

This is according to multiple sources available to SaharaReporters on Friday.

Malami had in April declared interest in the Kebbi State governorship race. He also distributed over 200 exotic vehicles to party members ahead of the governorship primary in the state. On Wednesday, he submitted his N50 million nomination form at the International Conference Centre.

Several sources close to the minister said he withdrew from the race over fear that he may not get the ticket.

There has been a cold political war between the incumbent governor of Kebbi State, Atiku Bagudu and the political arrowhead of Kebbi, Senator Adamu Alieru over who succeeds the former.

While Bagudu, who chairs the Progressive Governors Forum (PGF), is rooting for Malami as his successor, Aliero, a two-term governor of the state, has Senate Leader, Yahaya Abdullahi as his preferred candidate for the APC governorship ticket.

Aliero’s camp has Bala Sani Kangiwa, who was removed during the last state congress of the party as their chairman, while the camp of the governor has Abubakar Kana Zuru as chairman.

Two secretariats of the APC now exist in Birnin Kebbi, the state capital.

Fearing he may not get the ticket under the current circumstances, Malami was said to have changed his plan and pulled out of the governorship race.

“He (Malami) actually pulled out of the race because he knows he can’t win without being the Attorney General,” a source told SaharaReporters.

Malami, a lawyer from Kebbi State who was hardly known before 2015 when he was appointed into the administration of President Muhammadu Buhari, is today one of the richest men in Nigeria.

In 2020, a series of detailed investigations carried out by SaharaReporters showed that Malami had acquired several properties whose value run into many billions of naira since being appointed into the administration of President Buhari as Nigeria’s chief law officer.

For example, the AGF has an underground hotel in Sokoto, three houses at Peace Estate, Abuja, a brand-new state-of-the-art school in Kebbi, two houses for his sons worth N100 million each and a new hotel under construction in the Jabi area of Abuja.

Malami also bought a house worth N150 million in the Gwarimpa area of Abuja. A school located at the back of NITEL in Gesse Phase 1, Birnin Kebbi and a house worth N600 million on Ahmadu Bello Way, Nasarawa GRA, Kano, are among properties acquired by Malami since he became a minister under President Buhari.

The houses he built for his sons in Kebbi are 200 metres apart in a posh part of the city.

That is not all. Malami also built N3billion multipurpose event centre in Kebbi State named Azbir Arena, for his son.

The facility is said to be an entertainment centre with a plaza and a kids’ playing section.

This is apart from Rayhaan Hotel located on Zaria Road, opposite Aminu Kano Teaching Hospital, which the AGF massively upgraded using unexplained wealth.