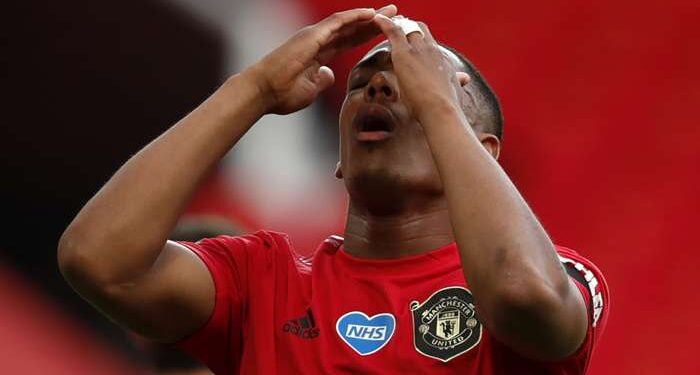 On a day when Manchester United found out exactly what was needed for them to secure Champions League football next season, Ole Gunnar Solskjaer’s team fluffed their lines, conceding an injury-time equaliser from Southampton at Old Trafford.

Monday began with the news that Manchester City would win their appeal to the Court of Arbitration for Sport to have their two-year European ban imposed by UEFA overturned. That had the knock-on effect of ensuring that any team hoping to reach the promised land of the Champions League would have to finish inside the top four. Fifth would no longer be good enough.

That, though, is exactly where United find themselves tonight; level on points with a stuttering Leicester City but on the outside looking in.

With Chelsea and Leicester both on the end of significant defeats over the weekend, a win for United would have seen them jump up to third with just three more league games remaining. A goal from Michael Obafemi in the 96th minute, however, means the race for the top four could go now to a nail-biting, final day clash against Leicester.

Their recent form had been imperious. Since the draw at Tottenham, their first fixture after the restart, United had reeled off four consecutive wins. That run, aligned with the dodgy form of Leicester and Chelsea, had led the English record champions to become likely candidates to make the Champions League.

But now, following City’s win in the courts and this damaging blow, it’s back up for grabs.

Ralph Hasenhuttl’s side made life difficult for United all night long. Their strong defensive shape, high press and compact midfield meant the hosts struggled to make an impact from the get-go.

“Tight, tight, tight, keep it tight,” the Saints boss screamed from the touchline and it was Danny Ings doing just that, an action which led to Southampton deservedly taking the lead. Ings caught Paul Pogba in possession on the edge of the area, then fed the ball to Nathan Redmond.

Redmond delivered a good ball to the back post where Stuart Armstrong was there to finish in style – and the visitors were hungry for more, with Redmond on the charge again a minute later.

But United, unbeaten since January and playing an unchanged side for the fifth consecutive league game, had the confidence to get back into the game through the deadly strike force of Anthony Martial and Marcus Rashford. Their majestic ability turned the game on its head in the space of two minutes and 31 seconds.

Aaron Wan-Bissaka navigated his way through a compact Saints backline with some excellent footwork but it was Martial who really impressed to bring United back on terms. Pogba played the ball into the area and Martial somehow managed to poke the ball to Rashford as he was falling to the ground under a challenge from Armstrong.

There were loud shouts for a penalty but United didn’t need one as Rashford showed his composure to level things up with his 16th goal of the season. Martial’s assist meant it was the sixth time the pair linked up for a goal in the current campaign. No duo have combined for more goals for United in a single season and, while their partnership is fruitful, they have a personal battle going on to become top scorer this term.

The pair were neck-and-neck going into this fixture and, minutes after assisting Rashford, the Frenchman was on the scoresheet himself. Bruno Fernandes provided another assist but it was a superb individual effort as Martial’s burst of pace left Kyle Walker-Peters in his wake.

He cut inside and rifled the ball past McCarthy to match Rashford on 21 for the season. It was his 50th league goal for the club.

The same pair combined perfectly in the second half with an exquisite piece of football linking up down the left. Somehow Rashford’s effort was kept out by a rushing Ryan Bertrand, who cleared his effort for a corner.

That was a big chance Solskjaer would come to rue. Pogba, who had an off day, hit an effort against the post and there was another great chance for Martial after he left the Saints defence for dead only to be denied by a brilliant block from Jack Stephens.

But, for all the conviction of United’s front line their defence have looked shaky at times since the restart and the visitors continued to cause problems, especially on the counter. Walker-Peters flashed a warning sign just after the hour mark as he put a brilliant ball across the face of goal but there was nobody there to finish.

United were having to do something they haven’t had to do in a while; perform under pressure and look to capitalise on dropped points from their rivals. This United side are not used to coming from behind and winning and, with so much at stake and pressure mounting, Solskjaer’s side sat back going into the final 10 minutes.

De Gea produced a fine save to deny Redmond in the 85th minute but the chances kept coming for the visitors.

A nasty clash of heads between Brandon Williams, who replaced an injured Luke Shaw, and Walker-Peters led to five minutes of injury time and United playing out the game with 10 men.

The confidence that had been seen in the team in the past few weeks disappeared as they tried to cling on for the three points. In the end it wasn’t enough, with Obafemi’s finish from a last-gasp corner securing a point for the visitors.

The unbeaten run continues but it’s a story of missed chances and a huge missed opportunity for United in the race for the top four.