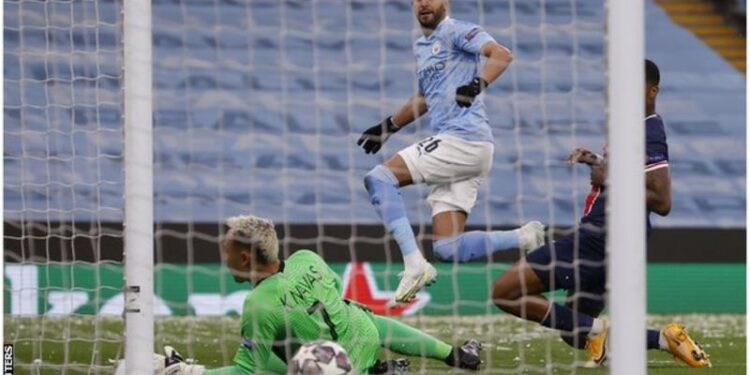 In a game played in unseasonal snow, the brilliant Riyad Mahrez capped a sweeping move started by goalkeeper Ederson’s 60-yard pass to extend their 2-1 advantage from the first leg in Paris.

PSG suffered a serious blow before kick-off when world-class forward Kylian Mbappe was restricted to the bench because of injury. They did not lack endeavour or intent and had early hope when a penalty was awarded for a handball by Oleksandr Zinchenko before it was correctly overturned, but with Neymar subdued and City throwing bodies on the line in defence, Mauricio Pochettino’s side could not find a way through.

Mahrez punished them again just after the hour when he turned in Phil Foden’s cross at the far post to effectively end the contest.

PSG, as they did when Idrissa Gueye was sent off late in the first leg, lost their discipline and Angel di Maria was shown a red card for a senseless stamp on Fernandinho following a touchline tangle.

City were in full control, avoiding further mishap to set up the Champions League final they and manager Pep Guardiola have craved, against either Chelsea or Real Madrid in Istanbul on 29 May.

Man City within touching distance of the great prize

The celebrations when Manchester City scored and at the final whistle illustrated the significance of what these players and Guardiola have achieved.

Guardiola and City have been sweeping up domestic titles on a regular basis, with his third Premier League title a formality which could be confirmed with victory against Chelsea here on Saturday.

This tournament, however, has been the one code an outstanding team has been unable to crack, with hard-luck stories to tell and crucial slips when the pressure is on, such as when they lost 3-1 to underdogs Lyon in a one-off quarter-final last season.

City have shown great maturity and development this season, keeping their nerve when under pressure against Borussia Dortmund in the last eight and also surviving a PSG surge in Paris six days ago to recover for an outstanding win.

Here, early nerves were settled by Mahrez’s goal and any further PSG threats were repelled with resilience and, when needed, desperate defending to ensure the lead they worked so hard to establish was well protected.

The Champions League has always been regarded as confirmation that Manchester City were a European superpower – now this high-class side will have the opportunity to confirm that status in Istanbul.

City’s success has been built on a squad effort, as proved by the way those who missed out on the starting line-up, such as Rodri, Aymeric Laporte, Joao Cancelo and Raheem Sterling, provided noisy support and encouragement from the sidelines.

Inevitably, though, there were stand-out performers and the list included match-winner Mahrez, the precocious Foden and the often unsung defender Zinchenko.

Mahrez took his time to settle in the early days of his City career but he is now a key component in Guardiola’s line-up, a creator and scorer of important goals, such as the two here. In eight Champions League starts this season he has scored four goals, including in both legs of this semi-final.

The first goal was classic Manchester City, started by remarkable vision from Ederson and finished emphatically by Mahrez.

The Algerian was a huge threat all night, tormenting PSG, and Foden was not far behind, as he grows in stature with every game. He has strength, vision on the ball and an end product, providing a perfect delivery for the second goal.

Zinchenko got the nod ahead of Cancelo and delivered a superb display, a threat going forward and top class in defence, with one crucial block from Neymar in the second half.

Above all, this was a team effort and Manchester City richly deserve their place in the Champions League final.

PSG’s season hangs in the balance

Having taken one giant stride forward in Europe by reaching the Champions League final last campaign, this season feels like two steps back for the French side.

While obviously disappointed to lose to Bayern Munich in Lisbon, it will at least have felt like a display and achievement to build on.

But there is little they can take away from this semi-final loss, which not only saw them beaten by a superior and savvier side, but also inexcusably lose their discipline in both legs.

They now face an unfamiliar battle on home soil, in the shape of Lille’s strong challenge to their Ligue 1 dominance and a French Cup semi-final with Montpellier on 12 May.

Lose both and the unthinkable may happen on Pochettino’s watch – a season without league or European success. An inquest of sorts is inevitable. How severe and deep it is depends on the next 11 days.

Manchester City manager Pep Guardiola said: “I’m incredibly proud and my first thoughts are with the players who didn’t play today. They all deserved to play, everyone has made a contribution and now it is time to enjoy it. We have to win the league and we have two or three weeks to prepare for the final.

“They put a lot of players in the middle and we struggled a lot in the first half to high press and we changed at half-time. We recovered the ball better in the second half and we were much better in the way we played and 4-1 on aggregate against a team that beat Barcelona and Bayern Munich means a lot to us.

“People believe it’s easy to arrive in the final of the Champions League. Getting to the final now makes sense of what we have done in the past four or five years.”

Another English team in the final – the stats