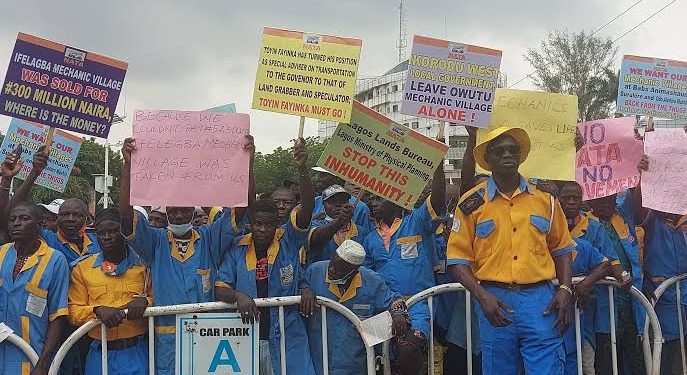 Despite the torrential downpour, yesterday, hundreds of mechanics and automobile technicians in Lagos marched to the Lagos State House of Assembly Tuesday to protest the demolition of their workshops by the state government.

The workers, members of the Nigeria Automobile Technicians Association (NATA), Lagos chapter, decried the forceful seizure of mechanic villages across the state and converting them for personal use or gain.

The workers called on the state governor, Babajide Sanwo-Olu, to save them from hardship and stop his cabinet members from selling their yards and workshops.

The protest kicked off around 10:30 a.m. after hundreds of the mechanics converged on Allen Bus-stop, Ikeja, with several others trickling in.

The mechanics took over the road from Allen to the state secretariat, a nearly five kilometres distance, grounding vehicular movement.

During the protest, the mechanics called for the removal of Toyin Fayinka, the special adviser to the state governor on transportation.

“Fayinka must go! Fayinka is a thief,” the workers kept chanting in their number.

“Toyin Fayinka has turned his position as special adviser on transportation to the governor to that of land grabber and speculator; Fayinka must go,” one of the placards reads.

The chairperson of NATA in Lagos, Jacob Fayeun, said the workers have suffered so much injustice in the hands of the present administration as many of their workshops are being taken from them.

“It was during the Alhaji Lateef Jakande’s administration in Lagos in 1981 that we were allotted mechanic clusters known as mechanic villages to curb the menace of the problematic ‘roadside mechanics’ littering Lagos neighbourhoods before that time.

“Unfortunately, since 1999, these public spaces, many of them in difficult marshy areas and canal setbacks redeveloped by the mechanics at great expense are being systematically stolen by government officials under various pretext.

“Most of these places are swampy areas, after developing it, they will turn back and take it from us,” Mr Fayeun said.

Mr Fayeun alleged that the special adviser to the governor, Mr Fayinka, has taken six workshops from them at Ladipo and turned two of them to ‘park and pay.’

“The said Fayinka took over a workshop belonging to a mechanic, Mr Adediran Ogunmuyiwa last September 2019. The forceful take-over led to a protracted illness and death of the poor man on May 25, 2020.

“Fayinka also demolished the Ifelagba Mechanic Village through the Lagos State Land Bureau because we refused to pay an arbitrary levy of N57.5 million imposed on us, apart from the annual Ground Rent we pay to the Ministry of Transport.

“He has also taken over our workshops in Ladipo, Mushin which he has turned to a “Park n Pay’ lot from where he makes millions of naira daily,” Mr Fayeun said.

He added that scores of mechanic villages, neighbourhood markets, saw-mills and other commercial places have been taken over by “government officials and their big business friends without alternative provision leaving hundreds of thousands of Lagosians and their families jobless and destitute.

“Unfortunately, the Lagos State government has shown utter disdain for the Nigerian Constitution which under Section 16 (2D) guarantees the right of all Nigerians to gainful employment.”

The lawmakers who addressed the protesters outside the House of Assembly complex, Abiodun Tobun and Emeka Idimogu, assured them that their complaints would be resolved by the appropriate committees in the House.

Recall that  the state government through the ministry of physical planning demolished a mechanic workshop at the Opebi area and forcefully evicted scores of workers in the yard.

Also in 2019, a large part of the Babs Animashaun Mechanic Village in Surulere was demolished and the mechanics evicted.

Meanwhile, Mr Fayinka on the allegations against him by the mechanics, he said they are not true.

“If you are a mechanic and you are given a letter of allocation, it is not permanent. That is why the Ministry of Transportation reviews the land and allows them to make a yearly payment to the government,” Mr Fayinka said.

The official said most lands used as mechanic workshops in Lagos are given to the Ministry of Transportation to hold in trust and there are terms and conditions for the use of such lands.

“You must not put a permanent structure on the place, you must not use it for any other purpose other than mechanic work, you must not sublet it. Most of these mechanics build renting shops on the land and abandon its primary responsibility of being able to mechanic workshop and covert it to shopping complex.”

Speaking on the six workshops that he allegedly took over at Ladipo, the official said the issue has been existing before he assumed office.

“It is an issue I met on ground before I assumed office in 2019. It has been on for years and because government is a continuum, I checked the file. The land was said to have been a property of LSDPC and they gave the Ministry of Transport to hold in trust.

“Whenever they give lands to the ministry of transport in trust, we give it to the mechanics. That is why they won’t get C of O, only a letter of allocation and yearly payment to the ministry, so that was the issue on the land at Ladipo,” Mr Fayinka said.