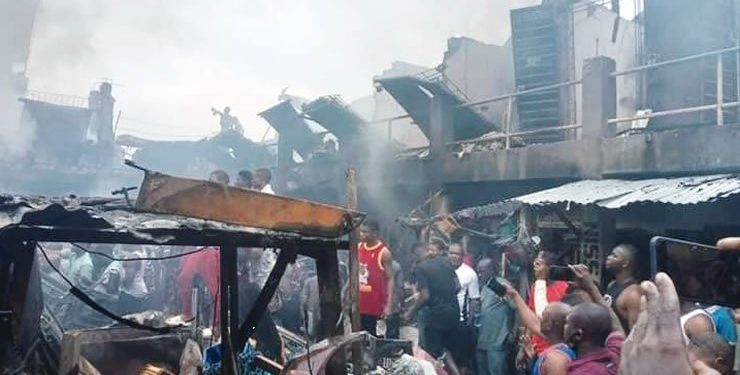 A storey building, properties and goods worth millions of naira were destroyed

Several millions of naira worth of properties has been engulfed in a fire that broke out, yesterday, at the spare part stores in the Ladipo market in Lagos’ Mushin axis.

The fire emanated, Sunday morning, from one of the stores dealing in vehicle spare parts in the Alapeju section of the Ladipo Market, Nosa Okunbor, spokesperson for the Lagos State Emergency Management Agency in a statement.

Mr. Okunbor said the fire was quickly put off by the agency and its collaborators.

He said LASEMA received a distress call and swung into action and “saved uncountable lives and properties from devastation by the fire outbreak.” He added that there was no record of fatalities.

“Timely response of the Agency to the fire outbreak reported through the Agency’s Toll-Free Emergency numbers 112/767 this morning, saved goods worth several hundreds of millions of naira, from destruction at the motor spare parts market, in Mushin Local Government Area, in Lagos.

“The incident which attracted the attention of residents also brought traders residing close to the market to their shops in order to either remove their wares or assist in putting out the inferno.

The Director-General of LASEMA, Olufemi Oke-Osanyintolu, said a storey building was burnt in the inferno.

“Upon arrival at the scene, agency responders discovered a single-storey building used for commercial purposes. (selling of motor parts) was engulfed in flames,” he said.

“The fire has been curtailed and damping down is over.”

The cause of the inferno has not been identified yet, said Mr. Okunbor.

Another container, yesterday, fell off a truck marked AGL 87 KZ, under the burnt Airport link Bridge, along Oshodi- Apapa...