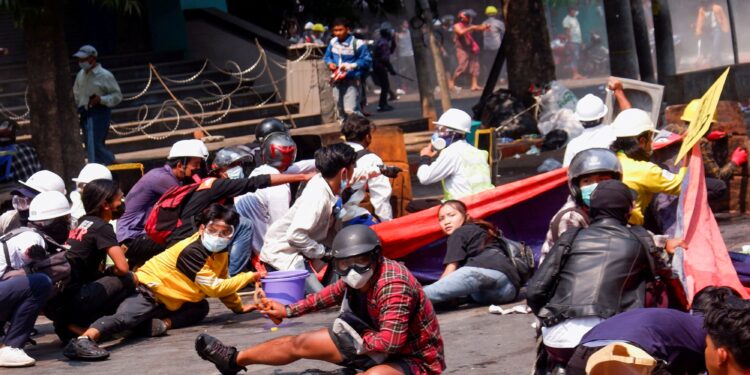 Protesters crouch after police opened fire to disperse an anti-coup protest in Mandalay, Myanmar, March 3, 2021. Among them, Angel, 19, also known as Kyal Sin, took cover before she was shot in the head. REUTERS/Stringer

At least 38 protesters across Myanmar have been killed in the latest crackdown on the anti-coup movement, an advocacy group said, as the generals who seized power on February 1 declared martial law over two areas of Yangon where Chinese factories were set ablaze.

A police officer also died making Sunday the deadliest day since mass demonstrations against the coup began six weeks ago.

A total of 126 people have so far been killed in “violent and arbitrary crackdowns” since the coup, the Assistance Association for Political Prisoners (AAPP) said, warning that casualties were “drastically increasing”. The number of people arrested rose to more than 2,150 people by Saturday, it added.

At least 22 civilians were killed and more than 20 wounded, including three in critical condition, according to AAPP.

China’s embassy in Myanmar said Chinese staff were injured and trapped when the factories were looted and set on fire by unidentified attackers.

Throughout the day, residents hiding in their homes reported hearing gunfire, while military trucks wereseen driving through Hlaing Thar Yar’s streets. The area is one of the city’s poorest areas and home to people who’ve travelled from other parts of Myanmar to find work.

A doctor told the AFP news agency that she had treated about 50 people with injuries. “I cannot talk much – injured people keep coming,” she said before hanging up.

Escalating violence was also reported elsewhere in Myanmar including the second city of Mandalay, where a woman was shot dead, and in Bago, where two people were killed.

Meanwhile, state television MRTV said a police officer had died of a chest wound after a confrontation with protesters in Bago. He is the second policeman reported dead in the protests.

Also on Sunday, state media said martial law had been declared over Hlaing Thar Yar and the neighbouring Shwepyitha township.

The military government “gives administrative and judicial martial law power to the Yangon regional commander to practice [in Hlaingthaya and Shwepyitha townships] … to perform security, maintain the rule of law and tranquility more effectively,” said an announcer on state television.

Army-run Myawadday television said security forces acted after four clothing factories and a fertiliser plant were set ablaze and about 2,000 people had stopped fire engines from reaching them.

A spokesman for the military did not answer calls requesting comment. Martial law was also extended to four more districts of the city on Monday, Eleven Media reported citing an announcement on MRTV.

Doctor Sasa, a representative of elected lawmakers from the assembly who have formed a parallel government, voiced solidarity with the people affected by the military government’s move.

“The perpetrators, attackers, enemies of the people of Myanmar, the evil SAC (State Administrative Council) will be held accountable for every drops of blood that shed,” he said in a message.https://art19.com/shows/the-take/episodes/ac5af7a2-4c7c-46d5-bdb5-8510acf302f9/embed?theme=dark-orange

The United Nations’ envoy for Myanmar strongly condemned the continuing bloodshed in the country.

“The international community, including regional actors, must come together in solidarity with the people of Myanmar and their democratic aspirations,” Christine Schraner Burgener said in a statement on Sunday.

She said the Myanmar military was defying international calls for restraint, adding she had heard “heartbreaking accounts of killings, mistreatment of demonstrators and torture of prisoners” from contacts inside the Southeast Asian country.

“The ongoing brutality, including against medical personnel and destruction of public infrastructure, severely undermines any prospects for peace and stability,” she said.

In a statement, Dan Chugg, the United Kingdom’s ambassador to Myanmar, also said the British government “is appalled by the security forces’ use of deadly force against innocent people” in Yangon and other parts of Myanmar.

The Special Advisory Council for Myanmar (SAC-M), a group of prominent human rights experts calling for accountability in Myanmar, said it was concerned the military was on the brink of a “major crackdown” and called for immediate international political intervention.

“The recent behaviour of the military and security forces is deeply disturbing as it calls to mind the days and weeks leading up to the massive genocidal offensive against the Rohingya in northern Rakhine in 2017,” said Yanghee Lee, a founding member of the SAC-M who was the UN Special Rapporteur on human rights in Myanmar and investigated the crackdown, which led hundreds of thousands of Rohingya to flee into neighbouring Bangladesh.

Human rights groups renewed their call for targeted sanctions against the coup leaders and the military’s businesses.

“The longer it takes for strong action to come from the international community, the longer Myanmar’s generals will think they can get away with murder,” Phil Robertson, deputy Asia director at Human Rights Watch said in a statement on Monday.

China’s embassy described the situation as “very severe” after the attacks on the Chinese-financed factories, but did not comment on the killings.

“China urges Myanmar to take further effective measures to stop all acts of violence, punish the perpetrators in accordance with the law and ensure the safety of life and property of Chinese companies and personnel in Myanmar,” it said in a statement.

No group has claimed responsibility for burning the factories.

The embassy’s Facebook page was bombarded with negative comments in Myanmar language and more than half the reactions – over 29,000 – used the laughing-face emoji.

Anti-Chinese sentiment has risen since the coup with opponents of the army takeover noting Beijing’s muted criticism compared with Western condemnation.

China has said that the priority is stability and that it is Myanmar’s internal affair.

In its statement, AAPP said “junta forces did not leave the streets and wards and they violated and arsoned neighbourhoods [in Hlaing Thar Yar].”

The latest crackdown came a day after Mahn Win Khaing Than, who is in hiding along with most senior officials from the Aung San Suu Kyi’s National League for Democracy (NLD) party, said the civilian government would seek to give people the legal right to defend themselves.

Aung San Suu Kyi, who was detained along with other senior NLD leaders on February 1, is due to return to court on Monday. She faces at least four charges, including the illegal use of walkie-talkie radios and infringing coronavirus protocols.

The army said it took power because of fraud in last November’s election, which the NLD won in a landslide. Its allegations have been rejected by the electoral commission. It has promised to hold a new election, but has not set a date.