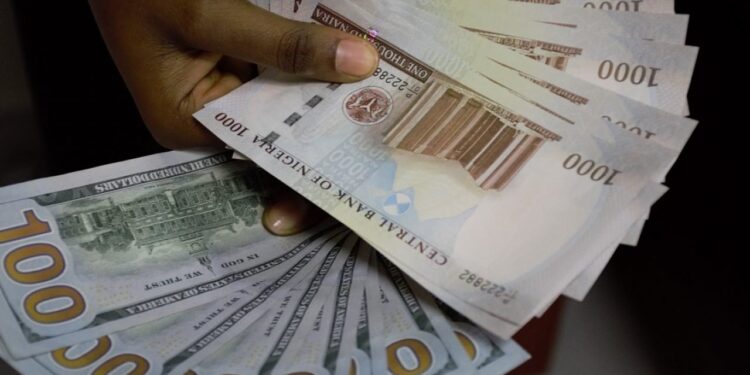 The Naira weakened further, yesterday, trading at N475 to the United States Dollar (USD) in the parallel market amid a rise in demand for the greenback.

The local currency, which has come under pressure in recent days, fell to 470 per dollar on Friday from 468 on Thursday. The naira was trading at 462-463 at the unofficial market at the start of this month.

In the Investors’ and Exporters’ forex window, the naira closed at 386 to a dollar on Monday, compared to 385.50 at which it opened, according to data from FMDQ Group.

The CBN has kept the official exchange rate at N379/$1 since August, when the naira was devalued for the second time this year from 360 per dollar. It was first devalued to 360 in March from 306.

Johnson said while there had been some recovery in the price of crude oil, the decline in oil production caused by the OPEC cut deal meant that proceeds from crude sales had dropped.

The financial expert said foreign portfolio investment in the country had plummeted, adding that diaspora remittances had also declined significantly.

“There is a lot of unmet demand for dollars,” Johnson said, adding that pressure was mounting even as the CBN continued to intervene in the market.

He said demand pressures were coming end-users and those whose obligations had matured and in need of forex to meet the obligations.

The MD/CEO, Financial Derivatives Company Limited, Mr. Bismarck Rewane, had said earlier this month that the naira would weaken in the parallel market and likely depreciate to 470-475 against the dollar in November and December.

He said with oil prices still under pressure again, the supply of forex into the country would be further limited.

He said the resumption in international flights, trading and manufacturing activities will heighten forex demand pressures.

Recall that, last week, that some members of the Monetary Policy Committee of the Central Bank of Nigeria expressed concerns at their last meeting over the high demand pressure in the nation’s foreign exchange market.

He added that legitimate sources of forex demand, speculation and other frivolous demands had contributed to sustaining pressure on the naira exchange rate.

Bloomberg reported last Friday that the naira had lost all ground it gained after the regulator started weekly interventions, signaling the continuous existence of pent-up demand for the greenback.

The CBN resumed sale to licensed Bureau de Change operators in September after the Federal Government opened up international travel following the lifting of COVID-19 restrictions.