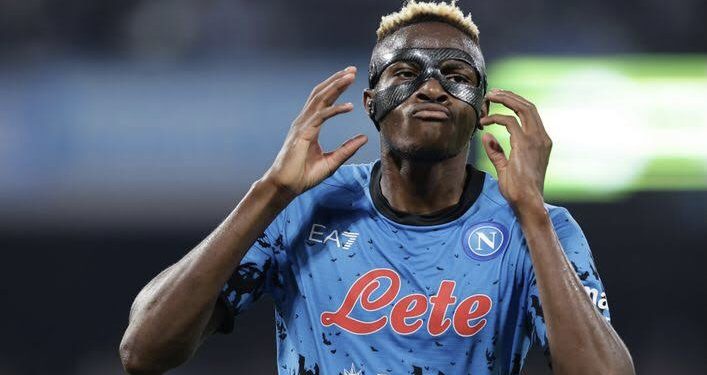 Nigerian striker Victor Osimhen continues to be an integral part of Napoli’s early season run, which has placed them at the top of the Serie A table with only one domestic loss in the campaign.

The 23-year-old has been unstoppable, and is also the current top scorer in the Italian league and according to Il Mattino, Aurelio De Laurentiis, the Napoli president, now values Osimhen at €140m.

The Italian news outlet wrote, “De Laurentiis thinks that Osimhen is worth it. The Nigerian knows how to do everything right: eight goals in the last eight games. He is undoubtedly the new ruler of Naples. Irreplaceable.”

Several top European clubs have been alerted to Osimhen’s and this is now the second time that Napoli has increased his valuation.

During the 2022 summer window, Napoli asked for €100m from all interested parties, and when the deadline set by the club reached, they increased the asking price to €120m, saying they would no longer consider any offer lower than that.

The publication revealed Napoli’s new asking price for Osimhen, while also reporting that both Manchester United and Bayern Munich are still interested in signing him.

United are shopping for a replacement for the departed Cristiano Ronaldo, while Osimhen still has two years to run on his Napoli contract, with talks of an improved deal reportedly in the works.

Osimhen continues to earn rave reviews for his performances at Napoli, with the Series A leaders losing only one game, winning 14 with two draws, to maintain their hold at the top the table with 44 points.

The Nigerian has played his part in that run, with 10 goals and two assists from his 13 league appearances so far this season.