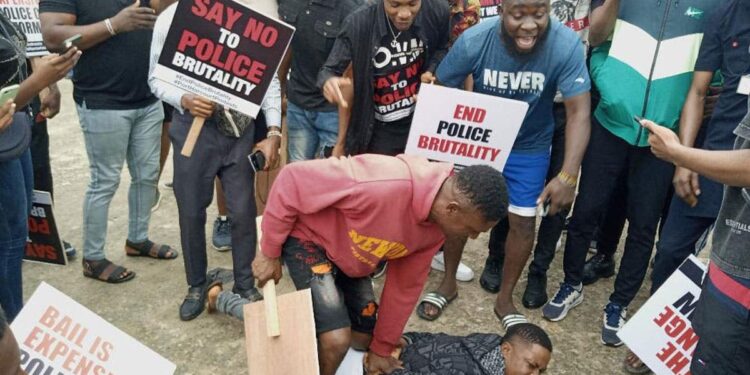 Recall that there have been protests in most parts of the country since Wednesday last week by Nigerians, mostly youths, who called for disbanding of SARS, accusing the police squad of corruption, high-handedness and harassment

On Sunday, the Inspector-General of Police, Mohammed Adamu, disbanded the squad and on Tuesday, he set up the Special Weapons and Tactics Team to replace the disbanded SARS.

Despite the disbanding of the squad, #EndSARS campaigners presented five demands to the Federal Government, which the later on Tuesday said it had accepted.

The campaigners’ five demands include release of all persons arrested by the disbanded police unit and justice for victims of police brutality; setting up an independent body to oversee the investigation and prosecution of all reports of police misconduct (within 10 days); psychological evaluation of all disbanded SARS officers before they can be redeployed, and increase police salary so that they can be adequately compensated for protecting lives and property of citizens.

However, the protests took a fresh dimension on Wednesday when hoodlums bearing cutlasses and sticks attacked protesters in Lagos and Abuja.

Condemning the attacks, the Pan-Yoruba group, Afenifere, stated that they reflected the divisive nature of the regime of President Muhammadu Buhari.

Its spokesman, Yinka Odumakin, said, “It is a reflection of the ‘we’ and them’ divisiveness of this government. We can only hope it would hand over a united Nigeria in 2023.

“A government that would mobilise on ethnic line against protests against police brutality is a threat against the unity of the country and will run the country towards implosion.

“The regime cannot unite Nigerians on anything and when they unite themselves on a common issue, it finds a way to split them based on fault lines.”

On his part, an activist and Senior Advocate of Nigeria, Mr Ebun-Olu Adegboruwa, said government was blameable for the attack on the protesters.

He said, “Generally, the lesson from this spontaneous protest is for the government to accept the constitutional right of citizens to freedom of expression, association and assembly, as guaranteed by sections 39 and 40 of the constitution. The people, who are in power now, the leaders of the All Progressives Congress, fully exercised these rights when they were in the opposition in holding peaceful protests.

“So far since this #EndSARS peaceful protests started, it has been clear that the purpose of the protesters is to make a point.  In Benin, you see them protecting policemen. In Lagos, you see them feeding people. So, it is the government and sympathisers of those who are in power that are trying to infiltrate the protesters to give the semblance of violence and I think that will be counter-productive.

“I verily believe that what happened in Abuja on Wednesday with hoodlums attacking the protesters should be laid at the foot of the government. Having seen that the youth have been peaceful, it should be the responsibility of government to grant them police protection.”