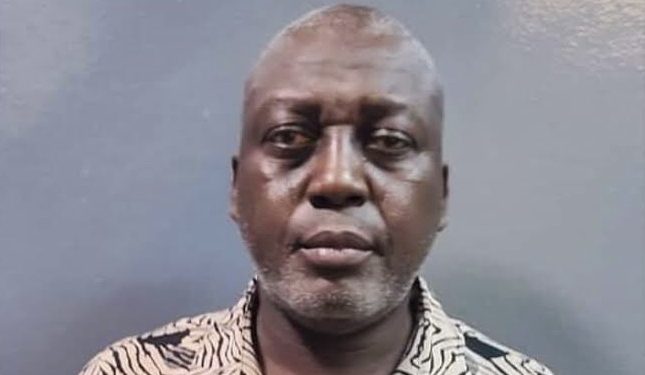 This is coming 10 days after he was declared wanted for his alleged involvement in drug dealings.

Recall that the anti-narcotics Agency had on Tuesday November 1 declared the suspect wanted following his failure to honour its invitations and an order granted by a Federal High Court in Lagos.

NDLEA spokesperson, Femi Babafemi, in a statement on Sunday, said: “the wanted drug kingpin was uncovered as the sponsor of some traffickers arrested by the anti-narcotics agency in their recent attempt to export cocaine to Dubai, UAE and other destinations outside Nigeria. The search for him however paid off on Thursday 10th November when he was successfully taken into custody where he is currently being interviewed.

“His lid was blown open after the arrest of one of his mules, Bolujoko Muyiwa Babalola, a Lagos BRT driver on 27th June at the Murtala Muhammed International Airport, MMIA, Ikeja, when he named Alhaji Ademola Kazeem, alias Adekaz as the owner of the 900grams of cocaine he ingested. Following Adekaz’s failure to honour invitations sent to him, the Agency approached a Federal High Court in Lagos with three prayers: to attach and seal his identified properties in choice areas of Lagos Island and Ibadan; declare him wanted and block his bank account with a cash balance of N217,000,000.00, all of which were granted.”

In a related development, NDLEA operatives also arrested a businesswoman, Okefun Darlington Chisom, over her links with two Pakistanis: Asif Muhammed, 45, and Hussain Naveed, 57, arrested at the Lagos Airport with eight kilograms of cocaine concealed in a sound system while attempting to board a Qatar Airways flight to Lahole, Pakistan via Doha on Saturday, November 5, 2022.

Also, an automobile parts dealer, Omeje Oliver (a.k.a David Mark), who was arrested on Monday, October 31 in Enugu where he fled to after abandoning his business at Aspanda, Trade Fair Complex Lagos since April 16 in connection with the seizure of 600 grams of heroin concealed inside soles of ladies footwears going to Liberia, has been linked to another drug seizure.

The NDLEA said a further look at the agency’s database revealed that Omeje was also involved in a case of 1.580kg Methamphetamine that was seized from one Victor Nwobodo Friday, who was arrested at the MMIA during his aborted trip to Jakarta, Indonesia on February 6, 2018. Charges have been filed against the suspect at the Federal High Court Lagos in respect of the old seizure in addition to that of the recent one.

Meanwhile, NDLEA operatives attached to the SAHCO import shed of the MMIA Lagos have intercepted another consignment of Tramadol from Karachi, Pakistan. A total of six cartons comprising 497,900 tablets of Royal Tramaking brand of Tramadol 225mg with a gross weight of 304.90 kilograms were recovered after a joint examination by stakeholders on Friday, November 11, 2022.

Saudi Arabia is becoming the drug capital of the Middle East