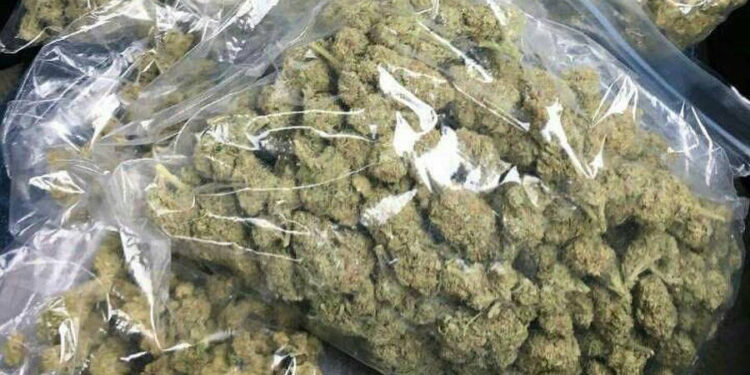 The Lagos State Command of the Nigeria Drug Law and Enforcement Agency has arrested a man found in possession of 5,371kg of cannabis estimated at N15 million.

The State Commander, Ralph Igwenagu, on Wednesday, said the seizure was made after officers raided a notorious syndicate in Ayobo, Lagos State.

Igwenagu, who noted that other members of the syndicate were on the run, said the seizure was one of the biggest in five years.

He said, “Based on information, our officers raided a notorious syndicate somewhere in Ayobo, Lagos State, and made this very monumental seizure. We have been doing a lot to trace these syndicates because they are notorious for bringing drugs from Osun State, Ondo State to Lagos, and we were able to make the seizure and arrested one of the members of the syndicate.

“Others are still on the run. We are hopeful that in no distant time, they too will be arrested and made to face the full wrath of the law.

He added, “This is the biggest single seizure that we have done in the last five years. The total quantity of drugs involved is over five tones at one particular time, at exactly 5,371kg at one single seizure.

“We have made very big seizures in the past but not in this mode at one particular time and that shows the level of drugs that can come into Lagos State and we are particularly happy that we can remove this out of circulation and it will save a lot of Nigerians.”

47-year-old Achienu Promise apprehended by the command said he was co-opted into moving the drugs from Osun State to Lagos.

He added, “I called the owner of the vehicle that diesel had finished and needed money to go back but he refused to send money to me.

He said it was his first time engaging in the ferrying of cannabis.

“The house in Ayobo that NDLEA raided to seize cannabis is not my house. It is the place I was directed to offload the drugs. They promised to pay me N50,000 but they just paid me N15,000 to buy diesel. They promised to give me the balance.”

Igwenagu, who estimated the value of the prohibited drugs to be worth over N15 million, said the “NDLEA will apprehend every criminal element who wants to use this period to perpetrate crimes”.