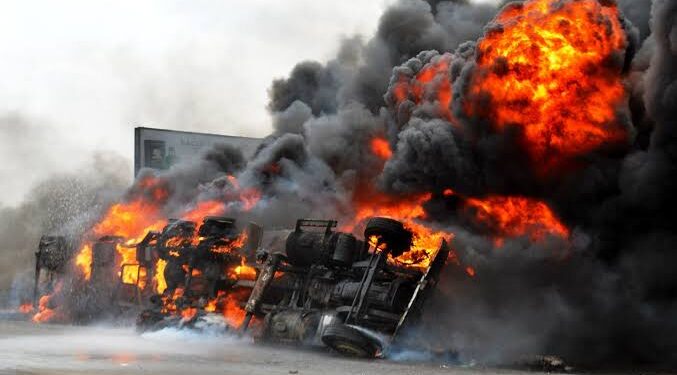 The National Emergency Management Agency (NEMA), has disclosed that the structures at the Oshodi-Apapa Expressway where a petrol-laden exploded yesterday morning have been “badly affected”.

A tanker conveying 44,000 litres of Premium Motor Spirit (PMS) crashed with another trailer and discharged its contents, which led to a fire outbreak.

The incident happened at 9:15 a.m. on the Oshodi-Apapa Expressway. It occurred opposite the Lagos State Fire Service Station located in the area, which led to a prompt intervention of the fire service personnel.

“The road structures are badly affected. Efforts are on to carry out integrity tests on them, especially the pillar of the bridge linking the Airport from Apapa – Oshodi way,” Farinloye said.

The coordinator had earlier said that the fire incident occurred when the tanker, laden with PMS, crashed on the side with another trailer loaded with iron rods, while in motion.

Officials of the fire service successfully separated the tanker body from the head and combated the inferno.

According to Farinloye, no casualties were recorded in the incident.