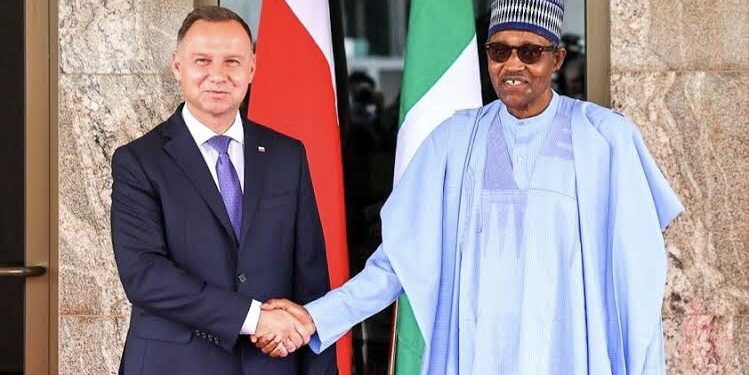 Nigeria and Poland signed memorandum of understanding in the area of agriculture as part of plan to strengthen global food security.

The agreement was signed in the presence of President Muhammadu Buhari and visiting Polish President Andrzej Duda, at the Presidential, Abuja on Tuesday.

This is just as both countries expressed concern over the negative effect of the Russia/ Ukraine war, which both countries described as “unjustified”

President Muhammadu Buhari, in his address, commended the Polish leader for the assistance provided to Nigerians fleeing the Russia/ Ukraine war, as well as those given opportunities to continue with their studies in Poland.

“Let me seize this opportunity to commend the efforts of the government of Poland for the assistance provided to the large number of refugees that flee into your country from Ukraine, which included a significant number of Nigerians,” he said.

The Polish leader who is on a tour of some African countries, had arrived Nigeria, from Dakar Senegal.

“I also wish to express our sincere gratitude on the kind and generous support extended during our government evacuation of our fleeing nationals,” he added.

The President while calling for stronger economic ties between both countries, added that “I will like to see an increase in the level of trade inspite of the long period of relations of our countries.

“I wish to express the readiness of Nigeria to sign more MoU in the field of energy and manufacturing.

“We are gratified that many times education and transfer. In view of the numerous global challenges, we will like to develop new mechanisms such as regular Strategic Dialogues on International issues.”

President Buhari also expressed hope for the extension of the cooperation in knowledge sharing in the areas such as Science and Technology and Information and Communication Technology, in order to help drive innovation in our countries and raise Consciousness global knowledge economy.

The Polish President in his response, described the MoU in agriculture as “immensely important piece of document, especially in the light of the food security crisis that is faced right now. And not only by Nigeria, but also by the entire African continent.”

He expressed concern over global food security and energy security, especially in the wake of the ongoing Russia war with Ukraine.

“Both of these topics, of course, stem from the situation that we are faced with today in Europe and to be more precise in our part of Europe. That is the aftermath of the Russian aggression and the war in Ukraine.

“The Russian aggression against Ukraine, which is totally unjustified, and has sparked off a very serious food crisis and a very serious energy crisis.

“As the country who is also a member of the United Nations, it is so important to support Ukraine in its export of grain and food products out of the country. But it’s equally burden to us to provide our support to Africa and in particular to our partners country, that is Nigeria.

“And that is why it’s so important to us to further strengthen the relations between Poland and Nigeria right now.” he said

Speaking on the energy security, the Polish President noted that the talks are essential from the perspective of supplying both LNG gas as well as oil to Poland and to the European Union.

“I want to also want to add that the first is applies of the LNG gas to our LNG gas terminal from Nigeria had already happened, just like the import of crude oil performed by our oil company Latos.

“Those shipments did happen in recent years. And that means well for the future, because we do want to further develop this cooperation, we want to increase the supplies from Nigeria to Poland. And by this way, we also want to contribute to the development of economic relations between both our countries.”