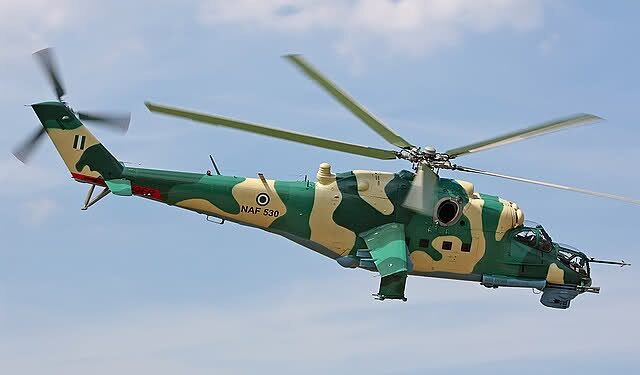 The Nigerian military has debunked claims that its helicopter was shot down during a mission to Banki in Borno State, on Tuesday.

Recall that, earlier, there were reports of a helicopter crash in Banki, a border community with Cameroon, with a humanitarian worker suggesting the helicopter was shot down.

The air force, in its statement, admitted that a UN helicopter was in the community but did not crash.

“No helicopter crashed today in Borno state. A UN helicopter indeed undertook a mission to Banki and has since returned to Maiduguri,” the air force said in a statement.

The UN Office for the Coordination of Humanitarian Affairs in Nigeria (UNOCHA) also denied that its helicopter was shot down.

“Contrarily to ongoing rumours, no UN helicopter was hit nor crashed today in north-east Nigeria.

Please refrain from sharing any unconfirmed information. Thank you,” UNOCHA Nigeria said in a post on Twitter.

“UN-HAS (Humanitarian Air Service) helicopter had issues shortly after taking off from Banki to Maiduguri and had to make an emergency landing. Banki military arrived the scene to provide security coverage while the team conducted emergency repair and the helicopter eventually flew back to Maiduguri,” the internal statement shared among UN staff stated.

The statement did not disclose details of what led to the emergency landing.

Borno is the Nigerian state most affected by the Boko Haram insurgency that has caused tens of thousands of deaths since 2009.

Many parts of the state are still inaccessible with millions of residents displaced by the insurgency.