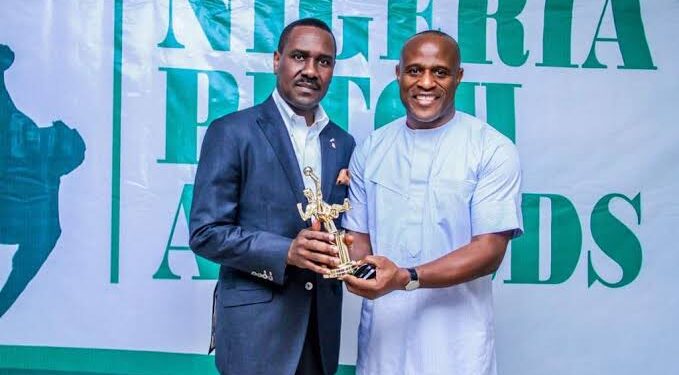 The seventh edition of the annual Nigeria’s Pitch awards organised to honour the country’s top performers in the football will be held in Lagos, on December 22.

The awards, which were billed for March, were earlier indefinitely postponed due to the onset of the coronavirus pandemic.

“It has been our tradition since 2013 to schedule our award ceremonies to coincide with major Super Eagles match engagements,” said Shina Philips, president of the Nigeria Pitch Awards, in a media briefing.

“The seventh award ceremony was to honour deserving award winners for the year, 2019. Unfortunately, the circumstances engineered by attempts to halt the spread of Covid-19 forced a major postponement of the event.

“This year’s award ceremony will mark the first award ceremony which will be held in Lagos. As organisers and as a responsible corporate citizen, we are mindful of the need to observe all government laid down Covid-19 protocols in order to keep our guests safe.

“This is why physical attendance will be restricted as many nominees including members of the Super Eagles will follow the event online,” he said.

Leicester City midfielder, Wilfred Ndidi, will battle Manchester United star and Napoli striker, Victor Osimhen, for the King of the Pitch accolade, while Asisat Oshoala is in line for the Queen of the Pitch diadem, alongside Paris FC’s Chiamaka Nnadozie and Onome Ebi.

Goal.com Samuel Ahmadu has also been nominated for the Football Journalist of the Year prize where he would be hoping to claim the honour for the second time on the bounce.

Known for its objectivity, the annual award ceremony is staged to reward key players in the country’s football sector and is sanctioned by the Nigeria Football Federation (NFF).

During the 2018 edition staged in Port Harcourt, NFF boss Amaju Pinnick praised the work of the awards’ organisers while guaranteeing the football body’s backing.

“We will not only associate with you, we will also do one or two things for you.

“The awards have been running for the past few years and they [organisers] have been very consistent.”

Senate has urged the Federal Government to declare a state of emergency on critical federal roads in Niger state that...

The Nigerian government has said 2,000 travellers who flouted the country’s travel protocols against the rampaging coronavirus pandemic have had...