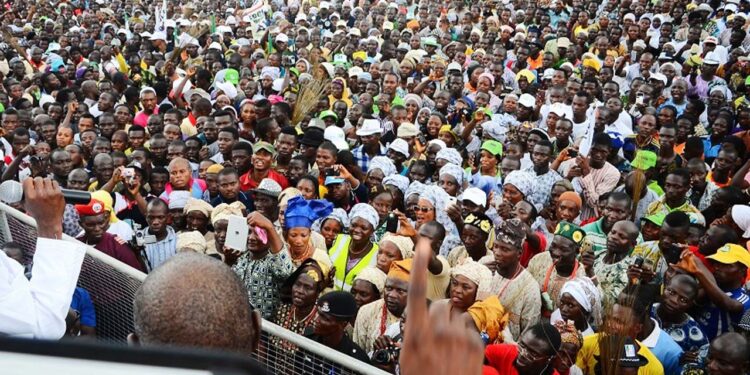 The Chairman of the NPC, Nasir Kwarra, who disclosed this in Abuja, at a press briefing on the commencement of the 11th phase of Enumeration Area Demarcation, EAD, also announced the next population and housing census would hold by middle of 2022.

Recall the commission had about two years ago put the estimated population of the country at 198 million.

Kwarra, who said the new figure was based on projection, noted however that, it would be challenging to know the exact population of the country since Nigeria had not been able to hold a census in the last 14 years

Kwarra, who noted that all the necessary preparation towards conducting a transparent population and housing census have commenced, said the commission was now waiting for President Muhammadu Buhari, whom he said, had the sole right to make the proclamation.

The NPC boss, while announcing the commencement of the Enumeration Area Demarcation exercise, Kwarra said about 260 local government areas out of the 774 in the country had been fully demarcated.

Kwarra, however, assured Nigerians and the international community that the Commission was determined to deliver to the country a Population and Housing Census that will stand the test of time.

Noting the commission will continue to explore all the means to avoid the pitfalls of the past, the NPC Chairman said, “Planning for census is anchored on the EAD as the basis for estimating both the human and material resources required for the census.

“In essence, the success of a credible and accurate census depends very much on the quality and reliability of the EAD. It is however necessary to state unambiguously that the EAD exercise is not the enumeration of persons living in the country.

“Its outcome is in no way the determinant of the population of any locality, Local Government Area (LGA) or State. The EAD is simply a preparatory activity before the actual census enumeration and it should not be equated with the census.

“In addition to being the foundation for the census, the national sample frame for the country is created from the EAD. The sample frame derived from the EAD is the one that is used by all data collecting organizations, including MDAs and research institutions.

“Furthermore, the frame is also used by international agencies including the IMF and the World Bank to monitor the economic and financial performance of the country.

“In addition to being the source of the national sample frame, there are several other deliverables from the ongoing EAD. Some of them include up-to-date list of households, buildings, socio-economic infrastructural facilities and their geo-referenced distribution across localities, wards, LGAs and States.

“The information from these outputs are useful for development planning and efficient distribution of infrastructural/ facilities and provision of socio-economic services.

“The Independent National Electoral Commission (INEC) is also into a special arrangement with the National Population Commission (NPC) in which the NPC is assisting INEC to create digitized maps of INEC Registration Areas (Wards) for the first time as part of the EAD. It is expected that the output of this collaborative effort will positively impact future elections.

“Aside providing information invaluable for security surveillance as well as crime detection, prevention and facts regarding household distribution obtainable from the EAD can be used to ameliorate the adverse effects of the ravaging COVID-19 Pandemic through a more systematic contact tracing and distribution of palliatives.

“It is important to state that latest technology is being deployed for this EAD exercise, including the use of very high-resolution satellite imageries as the base map, the use of Global Positioning System (GPS) for geo-referencing and the use of Geographic Information System (GIS) for data management.

“Also, Personal Data Assistants (handheld devices/tablets) that include computer software for population estimation are being used for data capture.

“In addition to enhancing speed, accuracy and efficiency, the EAD PAD which is a software developed by the Commission will virtually eliminate the use of paper in the process.

“What is more, the new EAD PAD has also facilitated the introduction of a portal that will serve as a dashboard to host and monitor the entire EAD process on-line/real time nationwide

“In order to boost the community mobilization and enlightenment effort of the Commission with clear objective to get people at the grassroots to take ownership of this very important national project, the Commission has taken a step further to engage some freshly retired (but not tired) staff of the Commission as Community Interface Assistants (CIAs).

“Their job entails essentially smoothening the activities of the field functionaries. They are to interface between the Commission and the communities as well as other stakeholders.

“They will bring their experience to bear by ensuring that there is co-operation between field officers and the respondents for a rancor-free EAD and other Census related activities.

“The 63 retired officers who come from across all the state of the federation have also concluded their training and orientation at Akwanga, Nasarawa State alongside other personnel.

“Let me restate that, the Commission is determined to deliver to the country a Population and Housing Census that will stand the test of time. We shall continue to explore all the means to avoid the pitfalls of the past.

“To this end, we solicit the support of all Nigerians as we embark on what is obviously going to be massive Enumeration Area Demarcation activities across the nation.

“We also call on the State Governors, Security agencies, traditional rulers and community leaders to provide security, logistics support and conducive atmosphere for our functionaries to perform to their optimum.”