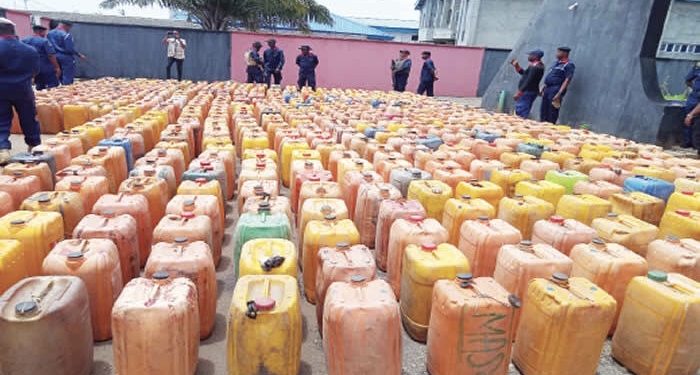 The Lagos State Command of the Nigeria Security and Civil Defence Corps (NSCDC) has recovered 21,600 litres of Premium Motor Spirit otherwise known as petrol from suspected oil vandals in the Badagry area of the state.

It was gathered that the anti-vandal and marine team of the Badagry division was on a surveillance patrol on Tuesday around 11pm when it intercepted 720 kegs containing 30 litres of petrol each.

According to PUNCH, it was gathered that the interception happened around Yafin creek, as the suspected vandals were about to smuggle the fuel to Benin Republic.

Sources said the vandals, who had operated in the area for a while, took to their heels after men of the NSCDC stormed their hideout on Tuesday.

He added that the exhibits would be transferred to the command’s headquarters at Alausa for further investigations.

The NSCDC Commandant, Lagos State, Eweka Okoro, confirmed the incident in a statement by the command’s Public Relations officer, Olumide Abolurin, on Thursday.

Okoro said arrests would soon be made, adding that the vandals had been identified.