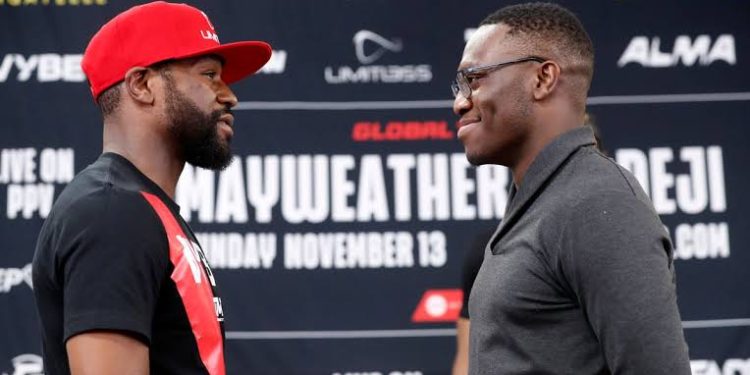 Undefeated boxing legend, Floyd Mayweather, defeated British-Nigerian Deji Olatunji in a huge exhibition boxing fight in Dubai on Monday morning, but not before Olatunji landed a punch in the fifth round to stun the Dubai crowd.

To no one’s surprise, it was Mayweather who came away with victory, but not without the efforts of the Youtube channel star, who took Mayweather to the sixth round before the fight was stopped in the American’s favour. The fight was a relaxed one with Mayweather even spending time in his opponent’s corner in between rounds.

The 45-year-old boxer beat the Youtuber convincingly without even breaking a sweat in the exhibition bout.

The crowd shouted, “Come on, Deji” with Mayweather even taunting him by keeping his hands at his side and entertaining the crowd.

The fight carried on and after a while, Mayweather decided it was time to end it, as he’s already put on a show, and in the sixth round he released the beast which was too much for Olatunji, who gave up, as he couldn’t keep his guard up, a clear sign that he had enough, with referee Kenny Bayless forced to stop the match.

This was Mayweather’s latest mega-money venture coming against the brother of famed YouTuber, boxer and singer, Olajide Olatunji, popularly known as KSI. This is the fifth exhibition fight for Mayweather since his retirement.

Although Olatunji took it seriously and trained for the bout as if there was a championship belt to be fought, as he even outweighed Mayweather 175.2 to 154.3, about 21 pounds more than the legendary fighter, he eventually lost.