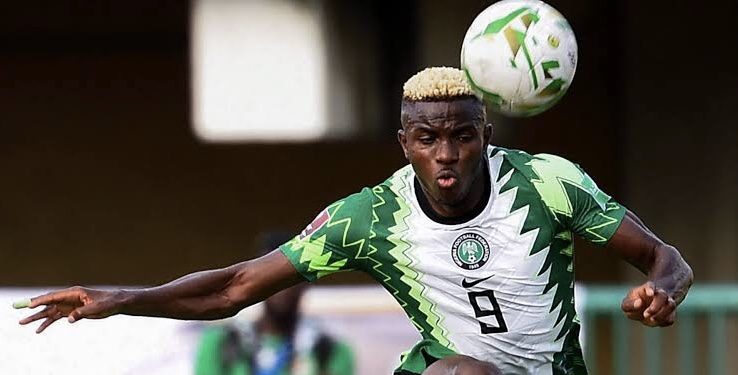 Super Eagles forward, Victor Osimhen, has been rated as Nigeria’s most valuable player in Europe this season following his impressive performances for Napoli so far this season.

The 23-year-old forward, who is currently the top scorer in Serie A this season with eight goals from nine games despite missing five weeks due to injury, has seen his stock rise to €65m, according to Transfermarkt.

The Nigerian proved his worth in Napoli’s comeback win at Atalanta on Saturday, a 2-1 result that saw Luciano Spalletti’s men claim a ninth straight win in Serie A.

The Super Eagle had a hand in all three goals on the day: he was penalised for his handball in the box and compatriot Ademola Lookman converted the resulting 19th-minute penalty, before he equalising four minutes later. He then assisted Eljif Elmas 10 minutes from half-time for the winner.

His feat saw him become Nigeria’s all time top scorer in the Italian topflight division. He is also the fourth most prolific striker in Europe’s top five leagues so far this season, averaging a goal every 91 minutes in the Serie A.

Osimhen has now contributed 10 goals (nine goals and two assists) for the Partenopei, who hold a six-point lead in Serie A.

Leicester City’s midfielder Wilfred Ndidi is ranked second and valued at €45m, while Everton’s Alex Iwobi is third and priced at €25m.

Duo Samuel Chukwueze and Taiwo Awoniyi complete the top five after the pair was valued at €20m each.

Sadiq Umar, who is currently recuperating from an anterior cruciate ligament injury, is the sixth most valued position and will cost his potential suitors €18m just as Ajax defender Calvin Bassey.

Kelechi Iheanacho is in eighth position and is valued at €17m, while the pair of Joe Aribo and Terem Moffi complete the list priced at €15m each.