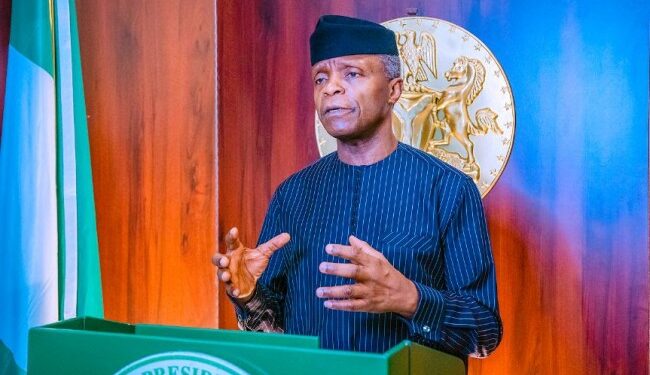 In the event, monitored in Lagos via Channels Television, the vice president spoke on the theme of the event, ‘Linking Tourism, Culture and Creative Industries: Pathways to Recovery and Improving Development’.

Osinbajo told the participants, drawn from different parts of the world, that music is a global language that people can enjoy without understanding the lyrics.

He said, “Music, as we all know, is a global language. Even those who don’t know the meaning of the words of a song enjoy the rhythm. And some find out the meaning of the lyrics, discovering the cultures and ideas that inspire them.

“But let me just test that theory of mine, that is, that you don’t need to understand the words of any song to enjoy it and to be able to sing it and that music is indeed a very global language.”

To buttress his point, the professor sang Kizz Daniel’s hit song ‘Buga’; an act which caused cheers and applause from the participants.

He further asked the audience to join him in his rendition as he demonstrated the viral dance move associated with the song by raising his shoulders.

5G Auction Driven by Pursuit of Better Quality of Life, Not Revenue – NCC

5G Auction Driven by Pursuit of Better Quality of Life, Not Revenue – NCC