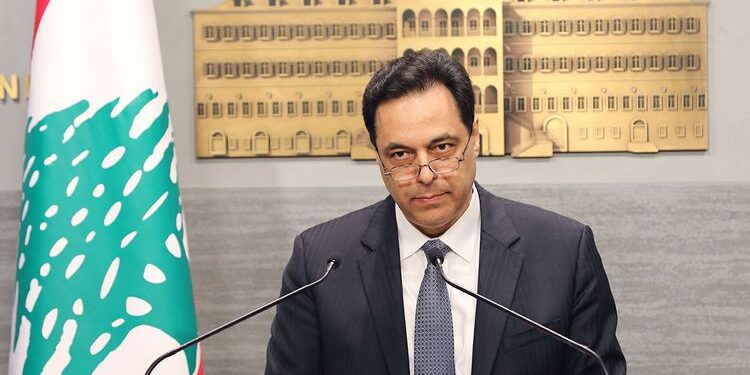 Caretaker PM appeals to politicians to put aside differences and form a new government as anger simmers over Lebanon’s financial crisis.

Protesters have blocked roadways across Lebanon for the fifth day in a row, setting fire to tyres and pieces of furniture as Lebanon’s caretaker Prime Minister Hassan Diab threatened to stop performing his duties to pressure politicians to form a new government.

The renewed protests on Saturday came amid anger about the collapse of the Lebanese pound, which fell to a new low of 10,000 to the dollar on Tuesday. The currency crash has resulted in a sharp increase in prices, as well as delays in the arrival of fuel shipments, leading to more extended power cuts around the country, in some areas lasting more than 12 hours a day.

In the Lebanese capital, a small group of protesters in front of the banking association demanded access to their deposits, and then walked to the Parliament building in downtown Beirut to express their frustration.

“The dollar is 10,500 [pounds] and everyone has four or five children on their neck, including their parents. They (corrupt politicians) need to feed us,” cried one protester.

In Tripoli, Lebanon’s poorest city, protesters blocked several roads and staged a sit-in at a roundabout near the city port, calling for the resignation of all political officials, according to the official National News Agency. Demonstrators also blocked roads linking the cities of Tripoli, Minnieh and Akkar, using trucks, water tanks, rubbish containers and stones, the NNA reported.

Lebanon’s financial crisis, which erupted in 2019, has driven nearly half the population of six million into poverty, wiped out jobs and savings and slashed consumer purchasing power. A new cabinet could implement reforms needed to trigger billions of dollars of international aid.

The country has been rudderless since August when Diab’s cabinet resigned on the back of the Beirut port explosion that devastated swaths of the capital. Prime Minister-designate Saad al-Hariri was nominated in October but has failed to form a new cabinet due to the political deadlock with President Michel Aoun.https://www.youtube.com/embed/zp21PAs-bMs?version=3&rel=1&showsearch=0&showinfo=1&iv_load_policy=1&fs=1&hl=en-US&autohide=2&wmode=transparent

‘What are you waiting for?’

In a televised speech on Saturday, Diab threatened to suspend his caretaker duties, warning that the country was quickly headed towards chaos if politicians could not put aside their differences and form a new government.

“If seclusion helps with cabinet formation then I am ready to resort to it, although it goes against my convictions for it disrupts the entire state and is detrimental to the Lebanese,” Diab said.

“What are you waiting for, more collapse? More suffering? More chaos?” he said, chiding senior politicians without naming them for grandstanding on the shape and size of the government while the country slides further into the abyss.

“What will having one minister more or less [in the cabinet] do if the entire country collapses,” he asked.

“Lebanon is in grave danger and the Lebanese are paying the price.”

In the past year, Lebanon has been through a popular uprising against its political leaders, the bankruptcy of the state and banking system, a COVID-19 pandemic and, in August, a huge blast that killed 200 people and destroyed parts of Beirut.

The collapse of the Lebanese pound on Tuesday was the last straw for many who have seen prices of consumer goods such as diapers and cereals nearly triple since the crisis began.

“Doesn’t the scramble for milk constitute a sufficient incentive to transcend formalities and roughen out the edges in order to form a government?” Diab said, referring to a recent Beirut supermarket incident in which shoppers fought over powdered milk.

A video of the squabble went viral on social media, underscoring the desperate state of the economy.

“The country is confronted with enormous challenges that a normal government cannot face without political consensus so how can a caretaker government face these challenges?”