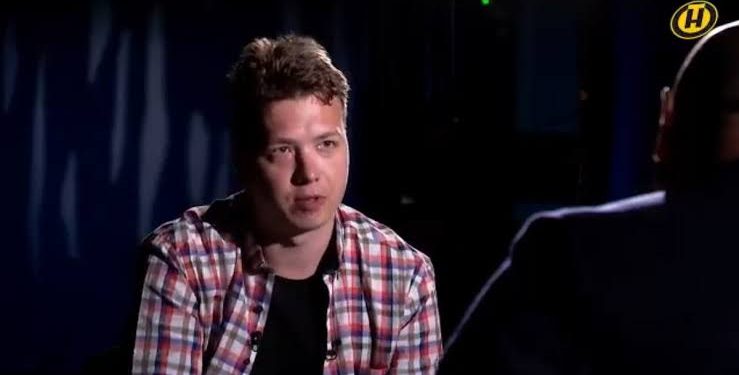 The family of Belarusian journalist Roman Protasevich says he was coerced into making a confession on TV of organising anti-government protests.

Mr Protasevich, 26, was arrested in Minsk last month after his flight to Lithuania was diverted.

In a tearful appearance on state TV, he praised President Alexander Lukashenko and admitted attempting to topple him.

Marks were visible on his wrists. Human rights and opposition campaigners say he was tortured.

Mr Protasevich was editor of the opposition Nexta channel on the Telegram messaging app until last year.

He was put on a list of “individuals involved in terrorist activity” by the government in Belarus.

Mass protests erupted across Belarus after Mr Lukashenko claimed victory in a 9 August presidential election widely condemned as rigged, which was followed by a crackdown.

The protests have been curbed and opposition leaders have been sent to prison or into exile.

In the interview broadcast on Thursday evening, Mr Protasevich admitted to attempting to topple Mr Lukashenko and said that he was speaking to the television channel by choice.

He said that he had criticised President Lukashenko a lot but “began to understand that he was doing the right thing and I certainly respect him”.

At the end of the interview, he burst into tears and said he hoped one day to marry and have children.

The journalist’s father told AFP TV that it pained him to watch the interview.

“I know my son very well and I believe that he would never say such things. They broke him and forced him to say what was needed,” he said.

“No one should believe these words [from Protasevich’s interview] because they were beaten out, through abuse and torture of my son.

“In the 21st Century, in the middle of Europe, he was kidnapped off a flight – it’s an act of state terrorism. They abuse and torture him, and use him in their political games.”

“It should be Exhibit A in a prosecution for torture and ill treatment under President Lukashenko,” said HRW director Kenneth Roth.

Thursday’s interview was Mr Protasevich’s third appearance on state television since he was detained.

In one interview, he said there was no use in the opposition calling for further street protests.

The journalist and his girlfriend Sofia Sapega were flying back to Lithuania, where they were both living, when their jet was made to land in Minsk over a fake bomb threat.

He faces serious charges. The charge of causing mass unrest can be punished by up to 15 years in jail. But terrorism offences carry higher sentences and as he was taken off the plane, passengers quoted him saying: “I’ll get the death penalty here”.

Mr Protasevich and Ms Sapega were led away by police and later appeared in videos where they were shown making what appeared to be forced confessions to crimes against the Belarusian authorities.

Their arrests prompted the European Union to last month agree on sanctions on Belarus, including banning the country’s airlines from using the bloc’s airspace and airports. Sanctions have also been placed on officials linked to the flight’s diversion.

“We won’t tolerate that one can try to play Russian roulette with the lives of innocent civilians,” EU Council chief Charles Michel said.

Ursula von der Leyen, head of the European Commission, described the incident as “an attack on democracy”.