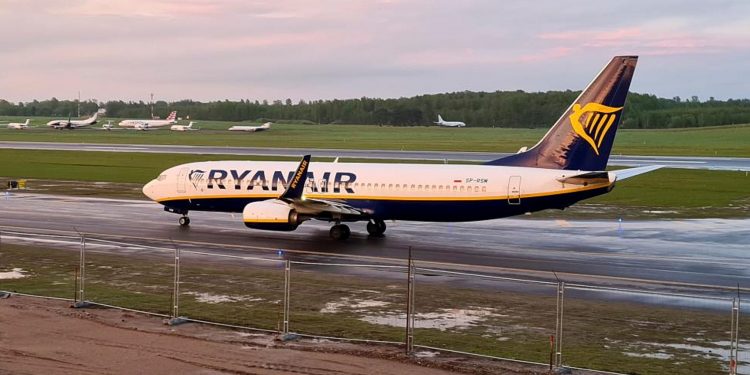 Some European leaders have described the incident as a “hijacking” for the purpose of arresting a dissident journalist.

Roman Protasevich, 26, was arrested after his flight from Athens was diverted from its scheduled destination of Vilnius in Lithuania on Sunday.

Belarus state media said the aircraft was switched to Minsk following a bomb threat, and that Belarusian President Alexander Lukashenko personally ordered a MiG-29 fighter jet to escort the flight to Minsk.

However, opposition groups have said it was an operation by Belarus special services to “hijack” the flight so they could arrest Mr Protasevich.

Simon Coveney, foreign minister of Ireland said: “This was effectively aviation piracy, state-sponsored”, and earlier said that inaction from the EU would be seen as weakness.

UK foreign secretary Dominic Raab described the actions as “outlandish” and a “ruse”.

“The UK condemns yesterday’s actions by the Belarusian authorities, who arrested journalist Roman Protasevich on the basis of a ruse, having forced his flight to land in Minsk. Mr Lukashenko must be held to account for his outlandish actions,” he said.

US Secretary of State Antony Blinken accused President Lukashenko’s government of endangering the lives of those on board the aircraft and demanded a “full investigation”.

“We strongly condemn the Lukashenka regime’s brazen and shocking act to divert a commercial flight and arrest a journalist. We demand an international investigation and are coordinating with our partners on next steps. The United States stands with the people of Belarus,” he tweeted.

Lithuanian President Gitanas Nauseda said he would propose banning Belarusian planes from European Union airports and “serious sanctions” against Mr Lukashenko’s government for what he described as a “state-sponsored terror act”.

Ursula von der Leyen, head of the EU’s executive European Commission, demanded that Mr Protasevich be released immediately and said that those responsible for “the hijacking must be sanctioned”.

And business minister Anne-Marie Trevelyan told Sky News on Monday: “This is unacceptable and we are very concerned by that behaviour.

“And I think all parties have been very clear this is a breach of normal international laws.”

Labour’s shadow foreign secretary Lisa Nandy told Sky News there had to be “robust consequences” for the action.

She urged the government to consider fresh sanctions on the Belarus regime, to make Belarus airspace a no-fly zone, to block flights from the Belarus state-owned airline, and to summon the Belarus ambassador to the UK.

The US, EU, Britain and Canada have already imposed travel bans and frozen the assets of almost 90 Belarusian officials, including Mr Lukashenko.

That move followed Belarus’s election in August – Mr Lukashenko won but opponents have said there was widespread fraud involved.

Mr Protasevich, who now works for Telegram channel Belamova, is wanted in Belarus on charges including organising mass riots and inciting social hatred.

The charges relate to anti-government protests following the disputed election, charges which he denies.

The Ryanair flight from Athens had been diverted just a few minutes before it was due to cross into Lithuanian airspace, according to flight tracking website FlightRadar24.

Ryanair said the plane’s crew was notified by Belarus of a potential security threat on board and was instructed to divert to the nearest airport, Minsk.

After seven hours in Minsk, the plane took off and later landed in Vilnius safely.