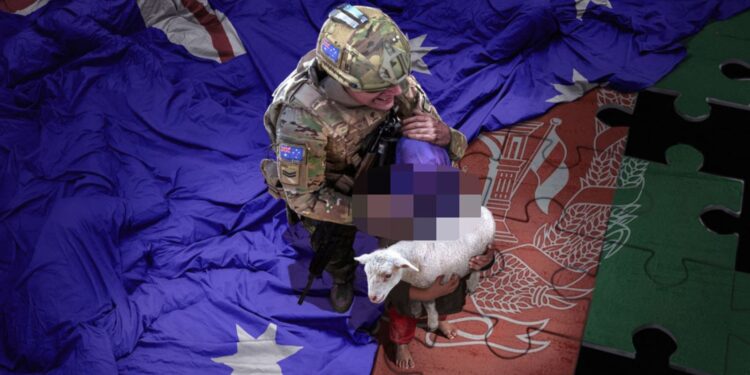 The image was posted on a Chinese official's account. Pic: Zhao Lijian

The image posted by a Chinese official appears to refer to alleged unlawful killings by Australian soldiers in Afghanistan.

Australia has demanded a Chinese official take down a fake image posted on Twitter depicting an Australian soldier holding a knife to the throat of an Afghan child.

“It is utterly outrageous and cannot be justified on any basis,” he said. “The Chinese government should be utterly ashamed of this post. It diminishes them in the world’s eyes.”

The image was posted on Monday by China’s foreign ministry spokesperson Zhao Lijian, along with the caption: “Shocked by murder of Afghan civilians & prisoners by Australian soldiers. We strongly condemn such acts, & call for holding them accountable.”

It appears to reference an independent report on alleged unlawful killings in Afghanistan.

The Australian government has told 13 special forces soldiers they face dismissal over the allegations, and said it has established a “transparent and honest” process for the investigation.

Australia’s relationship with China has been tense since Canberra called for an international inquiry into the origins of the coronavirus pandemic.

Before this latest clash, China had listed its grievances about Australia’s foreign investment, national security and human rights policy.

It also announced it will impose temporary anti-dumping tariffs of up to 212.1% on wine imported from Australia.

The Australian government had called the sanctions unjustified and said the world would be watching how China responded to tensions between the two countries.