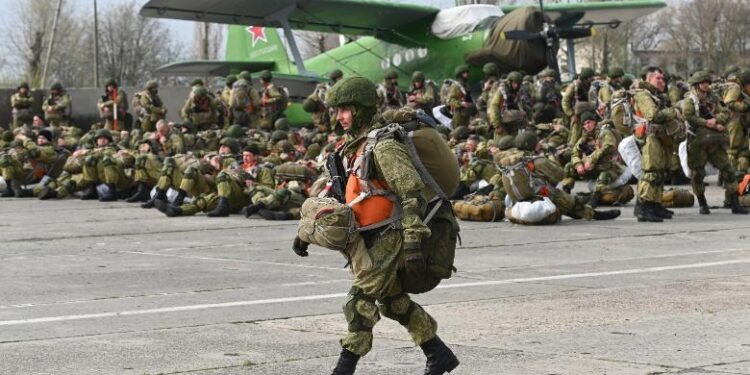 Russia ordered its top military brass to return troops to their permanent bases starting Friday, saying it had concluded a “snap inspection” of its forces in the country’s east and west, near the Ukrainian border.

A buildup of Russian troops along the border in recent weeks has reignited tensions in eastern Ukraine, where government forces have battled Russian-backed separatists demanding independence from Kiev since 2014.

Russian Defense Minister Sergei Shoigu on Thursday said troops had successfully completed drills near Ukraine and would return to their permanent bases by May 1.”I believe that the objectives of the snap drill have been fully achieved.

The troops have demonstrated the ability to provide a reliable defense of the country,” Shoigu said at a meeting in Crimea, which Russia annexed from Kiev in 2014.

Shoigu’s announcement comes weeks after Moscow initiated the largest buildup of troops near the Ukrainian border since 2014. The European Union estimated Tuesday that more than 100,000 troops had amassed near the border and in Crimea.

It was unclear from Thursday’s announcement how many troops would remain in the region.

State Department spokesperson Ned Price acknowledged Russia’s announcement, saying that the US would continue to closely monitor the situation with Ukrainian officials and other allies, but added that “what we’ll be looking for is action.”

“We have made clear in our engagement with the Russian government that it needs to refrain from escalatory actions and immediately cease all its aggressive activity in and around Ukraine, including its recent military buildup in occupied Crimea, and on Ukraine’s border, and its intention to block specific vessels in the parts of the Black Sea,” Price said at a briefing Thursday.

Some weapons from Russia’s 41st army, which include tanks and heavy artillery, will be left behind until the joint Russian-Belarusian Zapad-2021 strategic military exercises take place in September, according to Russian state news agency TASS.

That leaves Russia with more firepower on the Ukrainian border than it had previously.

Conflict Intelligence Team, a Russian open-source intelligence group that has been monitoring Russia’s aggressive military buildup on the border, suggested Thursday that it was too early to judge whether the news amounted to a de-escalation.

“By our assessment, the forces remaining at Ukraine’s border still present a danger of deployment into occupied Eastern Ukraine, while a large-scale invasion of government-controlled territory would certainly require moving more troops to the border,” CIT said on Twitter.

A Russian paratrooper walks near a plane during maneuvers in Taganrog, Russia, on Thursday, April 22, 2021.

On Tuesday, the Russian Ministry of Defense said that more than 20 ships had taken part in exercises in the Black Sea, which borders both countries.

Shoigu, who oversaw the drills in annexed Crimea near Ukraine’s southern border on Thursday, said Russia’s military had to be ready to respond swiftly to any “unfavorable” development given NATO’s ongoing Defender-Europe military exercises.

Defender-Europe is an annual, large-scale US Army-led multinational exercise designed to build readiness and interoperability between the US and its NATO partner militaries. It was canceled last year over coronavirus concerns.

“Every year in Europe, the Alliance conducts up to 40 major operational training events with a clear anti-Russian focus. In the spring of this year, the combined armed forces of NATO began the most ambitious exercise in the past 30 years,” Shoigu said.

He accused the military and political leadership of Ukraine of seeking to destabilize the situation in the Donbass conflict zone, and said the United States and NATO continued to conduct “provocative activities” in the airspace and waters of the Black Sea.

The NATO alliance has expressed deep concern over the Russian military buildup near Ukraine, described by NATO Secretary-General Jens Stoltenberg last week as “part of a broader pattern of Russian aggressive action.”Allies fully support Ukraine’s sovereignty and territorial integrity and we call on Russia to de-escalate immediately, stop its pattern of aggressive provocations and respect its international commitments,” he said.

Ukrainian President Volodymyr Zelensky on Tuesday invited President Vladimir Putin to meet in the Donbass, urging his Russian counterpart to restore a ceasefire in the eastern region where he said “millions of lives” are at stake. Putin said Thursday he was willing to discuss bilateral relations with Zelensky in the Russian capital, TASS reported.

Ukraine has been trying to bolster international support in its deadlock with Moscow, and has urged its Western allies to pledge new sanctions to discourage the Kremlin from resorting to more military force.

In his speech on Tuesday, Zelensky called on Ukrainian citizens to unite in the face of the Russian military threat. “Ukraine and Russia, despite their common past, look to the future differently. We are we. You are you. But this is not necessarily a problem, it is an opportunity. At the very least — an opportunity, before it’s too late, to stop the deadly mathematics of future military losses.”

He blamed Russia for refusing to support a “general statement” to restore a full ceasefire in the area, despite “the support of all parties.”In his annual address to the nation on Wednesday, Putin warned foreign powers not to cross Moscow’s “red lines,” but made no mention of the military buildup near Ukraine.

Last week, the Ukrainian President met in Paris with French President Emmanuel Macron and German Chancellor Angela Merkel — who joined via video link — to discuss the deteriorating security situation in eastern Ukraine and the occupation of Ukrainian territories. The three leaders ended their meeting calling on Russia to withdraw extra troops amassed on the Ukrainian border.