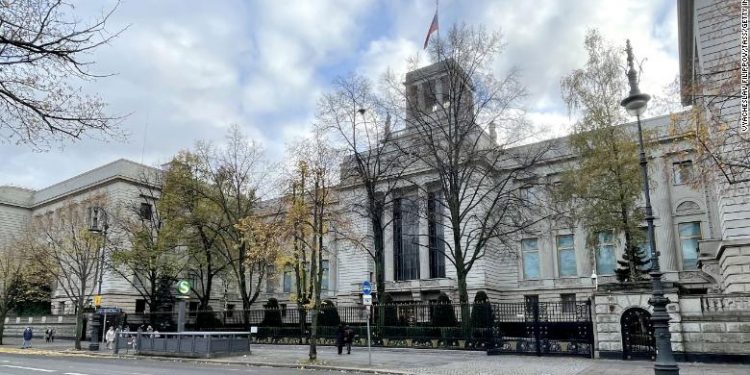 A Russian diplomat found dead on the sidewalk outside the embassy in Berlin last month is believed by German authorities to have been a secret agent for a Russian intelligence agency, Der Spiegel magazine reported Friday.

The body of the 35-year-old diplomat was found on the morning of October 19; he apparently fell from an upper floor of the Russian embassy building in the German capital, though it was unclear why he fell or what the cause of death was, Der Spiegel reported.

Der Spiegel and investigative site Bellingcat report that the dead diplomat had been accredited as second secretary at the Russian embassy in Berlin since 2019, but German security officials believe he was an undercover officer for Russia’s FSB, the internal security and counterintelligence service, and that he was related to a high-ranking FSB officer.

The FSB was previously linked by Western intelligence services to the murder of a Georgian exile who was shot dead in a Berlin park in 2019, Der Spiegel and Bellingcat reported. The Kremlin has denied any link between the killing and the Russian state.

The Russian embassy did not agree to an autopsy of the diplomat, and his diplomatic immunity meant that Germany’s public prosecutor could not carry out an investigation, Der Spiegel reported Friday.

Russian and German officials acknowledged the death of the diplomat on Friday following the Der Spiegel report.

“A tragic accident with a Russian diplomat occurred on October 19, 2021,” the Russian embassy said in a statement. “All the formalities related to sending the diplomat’s body to his homeland were promptly settled with the competent law enforcement and medical authorities of Germany in accordance with the current practice.”

“We consider the speculation that appeared in a number of Western media in the context of this tragic incident to be absolutely incorrect.”

A spokeswoman at the German foreign ministry told CNN the government was aware of the death of the diplomat, but due to “reasons of personal protection of the persons concerned and their relatives, no further details will be disclosed at this moment.”

The death of the diplomat came nearly a year after an investigation by CNN and Bellingcat revealed that an FSB toxins team of about six to 10 agents trailed Russian opposition leader Alexey Navalny for more than three years before he was poisoned in August 2020 with the lethal nerve agent Novichok.

One of the FSB agents was later duped into telling Navalny over the phone that the Novichok had been planted in his underpants — a detail that emerged when Navalny posed as a member of Russia’s National Security Council and called the agent to press him for details of the operation, as was revealed exclusively in another CNN-Bellingcat investigation.

FG to Use Part of Eurobond, Domestic Borrowing to Finance Fuel Subsidy