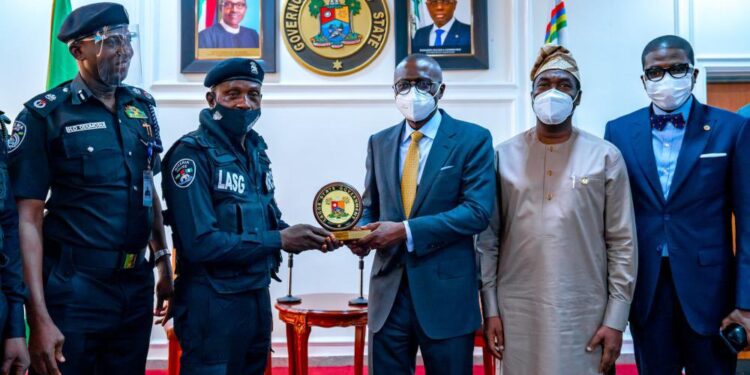 The award ceremony held on Monday, at the governor’s office, Ikeja Lagos.

In a statement by Muyiwa Adejobi, the police spokesperson, the governor applauded the assaulted officer for his “professionalism, perseverance, self-control and maturity exhibited during the attack on him.”

The police officer was assaulted by one Victor Ebhomenyen at Four Points Hotel on Saturday.

The police said the suspect, who is now in their custody, inflicted serious injuries on the officer.

The assaulted officer, Mr. Erhabor, is a personnel of the Rapid Response Squad (RRS).

Mr. Adejobi, a superintendent of police, said the Commissioner of Police in the state, Hakeem Odumosu, appraised the officer and presented him at governor’s office where he was presented a plaque.

The police spokesperson said the prime suspect, Mr. Ebhomenyen, is in police net, while his accomplice, one Etinosa Obaywana, is at large.

The suspects were stopped by the officer for allegedly driving against the traffic at Four Points Hotel, Victoria Island, on Saturday.

The police boss urged other police officers to emulate Mr. Erhabor and exhibit a high level of professionalism and perseverance even at the height of fierce provocation while on duty or off duty.