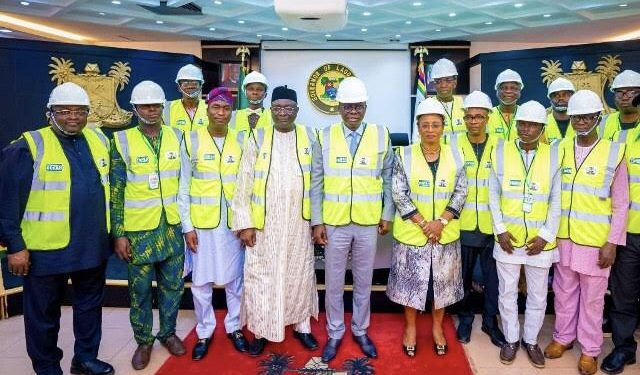 Governor Sanwo-Olu while inaugurating the committees at Lagos House, Ikeja, urged them to ensure that all infrastructure in the State meet the global standards of engineering practice.

The Governor warned that nothing short of the best standards will be tolerated and therefore urged the Committees to come up with stringent regulations that will guide the ethics and practices of the profession, as well as adherence to project specifications.

He said: “We have, with all sense of responsibility, given priority to the development of infrastructure. My tour of the State will demonstrate the attention of our administration to massive construction of roads, bridges, housing, water infrastructure, among others.

“The inauguration of the Lagos State Technical Committee of the Engineering Regulations Monitoring of COREN is the birth of a new dawn in what I consider COREN’s effort to revolutionalise the practice of engineering in Nigeria in general and Lagos State in particular.

“With this inauguration, the era of mediocrity should be gone. Engineering must take its pride of place and be the driver in our development effort in the State.

“Let me reiterate that in carrying out engineering projects in Lagos State, there will be no tolerance for quackery. In the same token, no Engineer will be allowed to supervise any project except he/she is duly registered by COREN and possesses current practising license. Possession of current Practising License shall be a condition for prequalification by Licence by all companies assigned to carry out engineering projects in the State.”

Governor Sanwo-Olu who congratulated members of the Lagos State Technical Committee and Lagos State Expatriate Monitoring Committee, for being found deserving of the selection, urged them to justify the confidence reposed in them and perform the assignment with maximum commitment and credibility.

He said “In selecting, the members of the Lagos State Technical Committee and Lagos State Expatriate Monitoring Committee, extreme care and diligence were applied. It is also ensured that these nominees are from very reputable organisations.”

Speaking earlier, the President of Council for the Regulation of Engineering in Nigeria (COREN) Engr. Ali Rabiu FNSE, commended Governor Sanwo-Olu for being strategic and deliberately enhancing available human and material resources to serve the people of Lagos State.

He said Governor Sanwo-Olu led administration is being applauded for many projects in the State, which are transformational projects meant to improve the qualities of life in Lagos State

“You are transforming the state into an industrial and economic wonderland of the continent. This is particularly true in Mr. Governor’s efforts in the construction of over 308 roads and the delivery of the red and blue rail project, which he promised to be operational by the first quarter of 2023,” he said.

The Committees are to be guided by the responsibilities of locating document organisations and practitioners and report to the Registrar; verify and monitor the professional competence of works approving Officers; act as COREN watchdogs on maintenance, upholding Engineering codes of practice in public works, prohibit default, and ensure that all such works are in accordance with Engineering design and specification by Registered Engineers; among others.