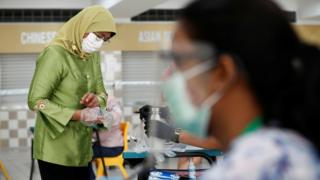 The election was widely seen as a referendum on the government’s handling of the coronavirus outbreak.

The small city state is one of only a handful of countries to have held a vote during the pandemic.

Strict safety measures were put in place, with voters wearing gloves and masks and given timed voting slots.

Singapore has been one of the worst hit countries in the Asia-Pacific region, with more than 45,000 cases.

As large-scale gatherings and events are deemed a high risk during the pandemic, only a few countries have gone ahead with national elections during the past months.

South Korea voted in April while Serbia went to the polls in late June. In both countries, voters returned the incumbent government to power.

The son of country’s founding father and long-time ruler Lee Kuan Yew, Mr Lee has been in office since 2004 – but has indicated the forthcoming term will be his last.

The PAP’s two-thirds majority gives him a virtually free hand in passing key bills, although the party leadership is expected to start some soul-searching with the diminished popular support.

Meanwhile, supporters of the the Workers’ Party have been celebrating on the streets, with honking horns and waving party flags.

“The results have surpassed the expectations even of some in the opposition,” Loke Hoe Yeong, author of First Wave, a book on the history of the Singapore opposition, was quoted as saying by the AFP news agency.

This time round, the main issues in the election were the government’s handling of the pandemic and the looming economic recession.

Singapore had initially been praised for keeping the virus in check until clusters in its migrant population dramatically drove up infection numbers.

In terms of per capita cases, Singapore now ranks among the world’s worst affected countries although the death rate is low and almost all cases originate from within the foreign worker community living in dormitories.

After weeks of strict lockdown, measures have been gradually eased since June and there’s only been a small uptick in infections among the local population.

For the election process, this meant the 2.65 million voters had to sanitise their hands and wear disposable gloves before receiving their ballot paper and proceeding to vote.

People were given two-hour slots during which they were recommended to vote to avoid crowding.

Mobile polling teams took ballot boxes to citizens who had recently returned from overseas and were in hotel quarantine.