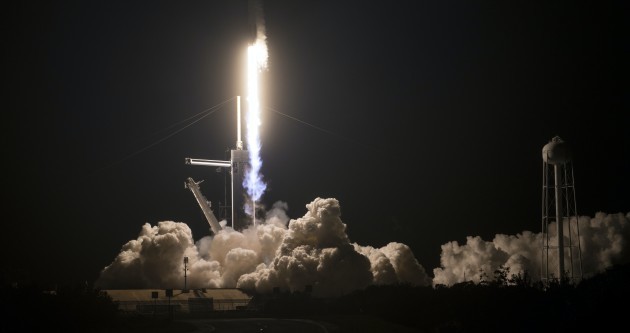 The crew have named their craft Resilience, as a nod to the challenges that 2020 has presented.

Four astronauts have begun their journey to the International Space Station (ISS) after a historic SpaceX launch.

It is NASA’s first fully-fledged mission sending a crew into orbit on board a privately-owned spacecraft and the second time that SpaceX’s Dragon capsule has taken astronauts to the space station, after a test flight back in May this year.

The crew, which is made up of three US NASA astronauts and one Japanese astronaut, lifted-off from NASA’s Kennedy Space Centre in Florida at 7.27pm local time (12.27am GMT), after weather conditions initially put the launch in doubt.

It is also the second time in almost a decade that a manned space flight has lifted off from the US, after the retirement of the shuttle programme in 2011.

SpaceX will now operate a rotation of journeys to the ISS on behalf of NASA, acting as a taxi service to the station.

It will take the crew around 27 hours to reach the ISS, and they will spend around five to six months in Earth’s orbit.

In an impressive feat of engineering, the Dragon capsule should fly to the ISS entirely on its own, without the need for crew members to control it – unless of course they need to.

After it thundered into the sky from Florida and up across North Carolina, the ship then tracked across the North Atlantic on its way into orbit.

Once Dragon had made it to the correct altitude, its first stage booster, known as Falcon 9, separated and successfully landed on a drone ship in the Atlantic Ocean called Just Read The Instructions.

On board, Mike Hopkins, the crew’s leader, said it was “one heck of a ride” shortly after take-off, adding: “There was a lot of smiles.”

Mr Hopkins is joined by physicist Shannon Walker and Navy commander Victor Glover, who will be the first black astronaut to spend an extended period of time on board the ISS.

Commander Glover will also be making his first ever trip to the ISS, while the others have called the station home before.

Soichi Noguchi, from Japan, is also on board, and is the third person in history to orbit on three different kinds of spacecraft.

When they reach the ISS, due to be around 4am GMT on Tuesday morning, they will be met by NASA’s Kate Rubins and Russian cosmonauts Sergey Ryzhikov and Sergey Kud-Sverchkov.

The Dragon crew have named their craft Resilience, as a nod to the challenges that 2020 has presented. Tech entrepreneur Elon Musk, who runs SpaceX, earlier revealed he “most likely” has COVID-19, despite reporting that he had mixed test results last week.

Following the launch, he simply tweeted a love heart.

President Donald Trump hailed the launch, tweeting it’s “great”. He said that NASA “was a closed up disaster when we took over” but “now it is again the ‘hottest’, most advanced, space centre in the world, by far!”

Vice President Mike Pence was at the launch on Florida’s east coast, on behalf of the president.

“It’s a testament to the power of science and what we can accomplish by harnessing our innovation, ingenuity, and determination. I join all Americans and the people of Japan in wishing the astronauts Godspeed on their journey.”