It was a miraculous escape, yesterday, for Stephen Ekanem, a driver with Valency Agro Nigeria Limited, after he rammed into a moving 40-feet container truck along Apapa-Oshodi Expressway, Lagos, with his Toyota Hilux bus.

The truck driver, Abraham Uwem, said he heard people call his attention and when he slowed down he discovered that the front side of the accidented vehicle was already under his truck.

“I am not at fault, I didn’t slow down, and he was over speeding,” he said.

It took the intervention of traders at the Ladipo Auto spare parts Market, Ladipo, to pull out the driver, who sustained injuries on his legs and left eye, and also to control traffic on the busy route.

The Lagos State Traffic Management Authority (LASTMA) Public Relations Officer (PRO), Olumide Filade, did not pick calls put through his telephone lines or respond to text messages sent to him at the time of going to press. 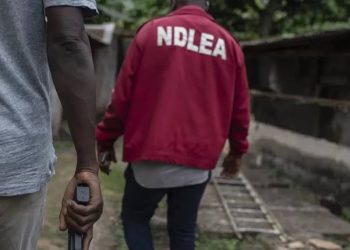 I Turned Lagos From Jungle To Megacity, Tinubu Boasts