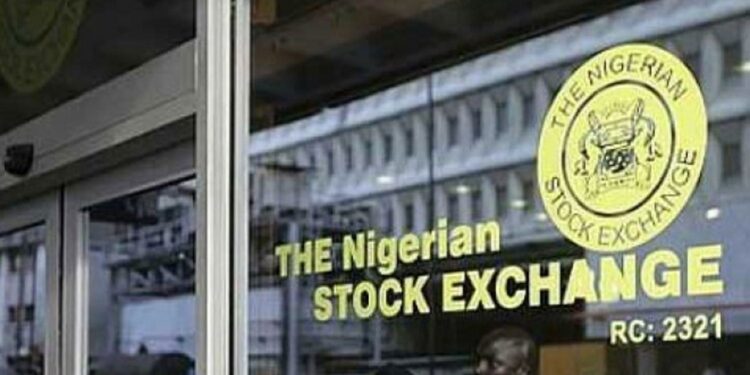 Three in every four price changes in the stock market closed weekend negative as concerns mounted over possible pullback in share prices.

The tenuous macroeconomic outlook was compounded by global anxieties over negative effect of a seeming coordinated interest rate hikes on future costs and corporate performance.

The benchmark index for the Nigerian equities market indicated average decline of 0.44 per cent last week, equivalent to net capital loss of N119 billion within the five-day trading week.

The All Share Index (ASI), the value-based index that tracks all share prices at the Nigerian Exchange (NGX), closed weekend at 49,475.42 points as against its week’s opening index of 49,695.12 points. Aggregate market value of all quoted equities at the NGX also dropped from the week’s opening value of N26.805 trillion to close at N26.686 trillion.

The slowdown at the market mirrored the global stock markets as investors opened up sell orders over concerns that seemingly coordinated rate hikes by central banks and continuing tensions over the Russia-Ukraine crisis could hurt corporate earnings.

From America to United Kingdom, Europe, Asia and Middle East; advanced and emerging markets of reference traded mostly negative. In United States, the Down Jones Industrial Average (DJIA) dropped by 37 per cent while the S & P 500 Index declined by 4.1 per cent. United Kingdom’s FTSE 100 Index dipped by 09 per cent. The STOXX 600 Index, which tracks the broad European market, dropped by 1.3 per cent.

The pricing trend at the market left nearly no safe haven for investors with above-average decline across several sectors.

All sectoral indices closed in the red; underlining the negative market-wide sentiment. The NGX 30 Index, which tracks the 30 largest stocks, lost 0.50 per cent. The NGX Banking Index declined by 3.31 per cent.

The NGX Insurance Index declined by 2.58 per cent. The NGX Consumer Goods Index dropped by 0.27 per cent. The NGX Oil and Gas Index and NGX Industrial Goods Index dipped by 0.16 per cent each. The NGX Pension Index, which tracks stocks specially screened for pension funds investments, declined by 1.74 per cent while the NGX Lotus Islamic Index, which tracks stocks that comply with Islamic rules, slipped by 0.03 per cent.

The financial services sector led the activity chart with 411.407 million shares valued at N3.943 billion traded in 9,471 deals; thus contributing 57.19 per cent and 49.26 per cent to the total equity turnover volume and value respectively. The information and communications technology (ICT) sector occupied a distant second place with 177.815 million shares worth N955.781 million in 1,573 deals while the conglomerates sector placed third with a turnover of 36.577 million shares worth N2.332 billion in 2,425 deals.

The three most traded stocks were Courteville Business Solutions Plc, Zenith Bank Plc and Access Holdings Plc, which altogether accounted for 278.293 million shares worth N1.984 billion in 3,038 deals, contributing 38.68 per cent and 24.78 per cent to the total equity turnover volume and value respectively.

Analysts at Cordros Securities said they expected return-seeking investors to rotate their portfolios towards cyclical stocks that delivered decent earnings during the second quarter earnings season. However, the increase in fixed-income return will continue to be a moderating factor.

According to analysts, the absence of a near-term catalyst will likely skew overall market sentiments to the negative side, particularly as the political space gets heated.

“Notwithstanding, we reiterate the need for positioning in only fundamentally sound stocks as the unimpressive macro environment remains a significant headwind for corporate earnings,” Cordros Securities stated at the weekend.

Analysts at Afrinvest Securities said the market would witness a “muted performance” in the days ahead in the absence of any major catalytic positive report.

CBN Writes Reps, Says Emefiele will not appear due to Ill-health