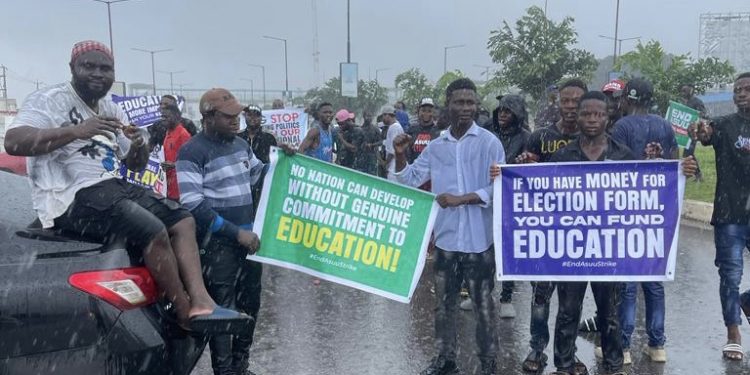 Students, under the aegis of the National Association of Nigerian Students (NANS), on Monday made good their threat to ground activities at the Murtala Muhammed International Airport, Lagos, when they defied early morning downpour to block access roads to both the international and domestic terminals of the airport.

The action was in continuation of their protests against the ongoing strike by the Academic Staff Union of Universities (ASUU).

The blockage of the access roads left air passengers stranded, forcing airlines to reschedule most of their flights.

The students, however, said that they will be taking their protest to Apapa Ports on Tuesday (today).
The association’s South West Coordinator, Adegboye Olatunji, disclosed this in an interview with one of our correspondents on Monday.

“We will be moving to Apapa seaports on Tuesday if the Federal Government refuses to do the needful. Students are tired of staying at home,” Olatunji said.

As at 8:00 am on Monday, NANS members stopped passengers at the Murtala Mohammed International Airport Toll gate plaza from accessing the airport to board their flights.

The students later moved to the domestic airport, causing a standstill situation along the airport road and Mobolaji Bank Anthony Road leading to the local airport.

Activities were affected at both Domestic Terminal I also known as the General Aviation Terminal and Terminal II as the students prevented passengers from accessing the airport.

The protesting students wielded placards with inscriptions such as ‘Our education is more important than your election’ and ‘Education is a right, open our schools,’ among others.

Speaking on the conduct of security agencies during the protest, Olatunji said, “Securities agencies complied and I can say it’s the best I have ever witnessed. NPF and Nigerian Army all did well and were in solidarity with us.”

The protest forced airlines to reschedule their flights.

Arik Air, in a notice of flight disruption cited by one of our correspondents, asked passengers who were affected to approach its contact centre to reschedule their flights.

The notice titled ‘Notice of flight disruption due to NAS action,’ read in part, “Please be informed that you may experience disruptions to your flights, especially out of Lagos, due to the protest by the National Association of Nigerian Students. Should you want to reschedule your flight, kindly call our contact centre.”

The Kwara State Police Command on Monday said there was no plan by NANS members to shut down the Ilorin International Airport. The command’s Public Relations Officer, Ajayi Okasanmi, in a statement said the state branch of NANS has assured the command that there is no such plan.

Okasanmi said the state Commissioner of Police, Mr Paul Odama, on hearing the news of the planned shutting down of the airport held a meeting with the president and some executive members of NANS in the state and they denied planning any protest.

But the President of the Student Union Government, University of Ilorin, Taofeek Opeyemi, denied that student leaders in the state met with the police boss.

Meanwhile, the National Industrial Court of Nigeria, Abuja Division will on Wednesday, deliver its ruling on the application filed by the Federal Government, seeking to stop ASUU from continuing its indefinite strike pending the determination of the substantive suit and every other application on the matter.

The vacation judge, Justice Polycarp Hamman, announced the date for his ruling after hearing the application on Monday.