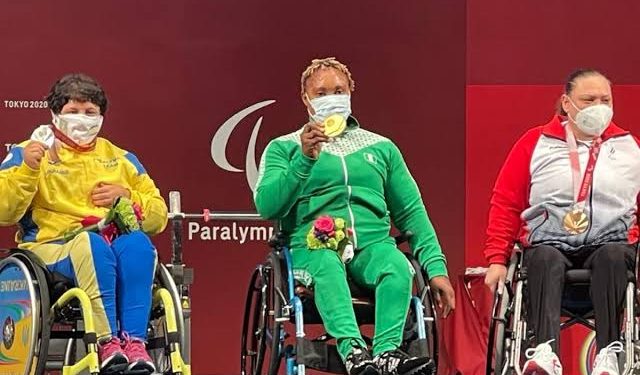 Team Nigeria won their second gold medal at the Tokyo 2020 Paralympics on Sunday as Bose Omolayo claimed victory in the women’s 73kg para-powerlifting.

Omolayo lifted a Paralympics record of 141kg to win the gold medal. She had earlier lifted 135kg and 138kg.

The 32-year-old however failed in her bid to lift 144kg, which would have been the new world record.

Nigeria has now won four medals at the ongoing Games.

Tijani Latifat won Nigeria’s first medal at the Paralympics on Thursday, winning the gold medal in the women’s 45kg Para-powerlifting.

She bettered her performance at the Rio 2016 Paralympics — where she won a silver medal — to claim the gold with a lift of 107kg ahead of China’s Zhe Cui and Poland’s Justyna Kozdryk, who won silver and bronze medals with a lift of 102kg and 101kg respectively.

Team Nigeria Captain Ejike won the bronze medal in the women’s 61kg category with a lift of 130kg.

Ejike, who holds the world record in that category, failed in her two other attempts to lift 135kg to settle for the bronze medal behind Mexico’s Amalia Perez and Uzbekistan’s Ruza Kuzieva, who won gold and silver medals respectively with lifts of 131kg and 130kg.

Nigeria is 27th on the medal’s table.

Nigeria’s men’s para-table tennis team will play Argentina in the Round of 16 of Classes 4-5 by 1:00am on Tuesday, while they will play the US in Classes 9-10 of the men’s singles by 2:30am same day.