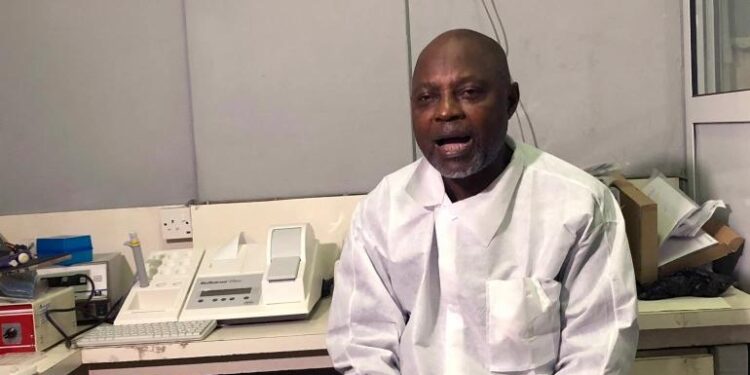 Virologist Sunday Omilabu says information he gathers will help battle the spread of the disease in Africa’s most populous country.

A Nigerian scientist has spent the holiday season in his laboratory doing genetic sequencing to learn more about the country’s COVID-19 variant, as cases increase in the country.

Virologist Sunday Omilabu says the information he gathers about the variant will help battle the spread of the disease in Nigeria, Africa’s most populous country with 196 million people.

Nigeria has confirmed 89,163 COVID-19 cases, including 1,302 deaths, according to the figures released on Sunday by the Africa Centers for Disease Control and Prevention.

Nigeria is seeing more infections of COVID-19 but it is not yet certain if that is from the variant, said Omilabu, the director of the Centre for Human and Zoonotic Virology at the Lagos University College of Medicine and Teaching Hospital.

“What we could say clinically is that we have more people coming down with severe signs and symptoms,” he said, describing how one person can spread the disease to four or five family members, which is a higher rate of transmission than had been recorded earlier.

“That shows us that something is happening. There’s a surge so we are recording that but we are yet to sequence any of those isolates,” to determine if the increased transmissions are caused by the variant, said Omilabu.

“I think we need to calm our mind down, there are going to be more variants to come,” he said.

“We need to be monitoring the virus, we need to sequence. If we sequence then we would have more information about what is in circulation and then, of course, we need to continue with surveillance, we need to monitor how active the virus is in the environment … so the public health experts, they have work to do and then government must support all these.”

As laboratory work is being undertaken to learn more about the variant, Nigerians should remain vigilant to avoid spreading the virus, he said.

“People still go and party. They still go to the club and without putting on face masks,” he said.

With COVID-19 variants emerging in Nigeria and South Africa, the World Health Organization said Africa needs to do more genetic sequencing, such as what Omilabu is doing.

“The emergence of new COVID-19 variants is common. However, those with a higher speed of transmission or potentially increased pathogenicity are very concerning. Crucial investigations are under way to comprehensively understand the behaviour of the new mutant virus and steer response accordingly,” said Dr Matshidiso Moeti, WHO’s regional director for Africa.

The new variants have emerged as COVID-19 infections are rising in the 47 African countries, nearly reaching the peak the continent saw in July, she said.

In the past 28 days, 10 countries – Algeria, Botswana, Burkina Faso, Democratic Republic of the Congo, Ethiopia, Kenya, Namibia, Nigeria, South Africa and Uganda – have reported the highest number of new cases, accounting for 90 percent of all infections in Africa, she said.

The new virus variant in South Africa is now the dominant one there and appears to be more contagious, according to John Nkengasong, director of the Africa Centers for Disease Control and Prevention.

Earlier this week, South Africa exceeded one million confirmed cases and is leading the continent’s new surge of COVID-19, which is coming “back with a vengeance,” Nkengasong said on Thursday.

“Variants are a hallmark of this type of RNA virus,” said Nkengasong during a news briefing.

“The more we do sequencing of this virus, the more variants we will see … We remain optimistic that the different vaccines will remain effective against these variants.”