The Poland-Belarus border crisis is escalating. Here’s what you need to know 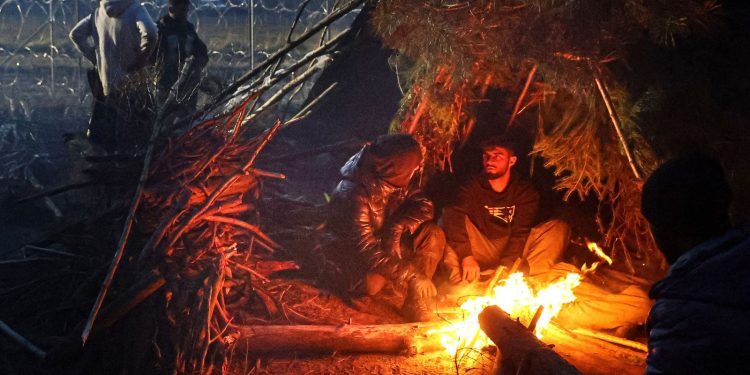 Migrants rest near a fire near the Poland-Belarus border on Wednesday, November 10. (Ramil Nasibulin/BelTA/Pool/AP)

Thousands of people are trapped between two borders on Europe’s frontier, in conditions deemed “catastrophic” by the UNHCR.

The West has accused authoritarian Belarusian leader Alexander Lukashenko of orchestrating a border crisis with Poland, using the migrants as a pawn in a political power play.

Lukashenko’s government has repeatedly denied such claims, instead blaming the West for the crossings and poor treatment of migrants.

Humanitarian groups are also accusing Poland’s ruling nationalists of violating the international law by pushing people back into Belarus, instead of accepting their applications for asylum. Poland says its actions are legal.

Here’s what else you need to know:

Migrants are trapped in terrible conditions: The situation at the border remains fluid, with at least 800 people currently camped out in a makeshift camp on the Belarusian side of the closed Kuznica border crossing, Polish authorities told CNN on Friday. Hundreds more have been “transported to other places by Belarusian services,” they said.

A Polish border guard press officer told CNN that around 4,000 migrants were camped out along the border on Wednesday night.

Meanwhile, the Belarus State Border Committee reported Tuesday that there are about 2,000 refugees on the border line, including women and children, who are threatened by weather conditions and lack of food and water.

Most of the migrants are from the Middle East and Asia and are hoping to travel on from Poland deeper into Europe. They’ve been gathering on the Belarusian side of the Kuznica border crossing — which was shut on Tuesday — for weeks.

Russia stands by Belarus: Russia, Belarus’ largest (and most important) political and economic partner, has defended Minsk’s handling of the issue and has denied any involvement in the crisis.

Kremlin spokesman Dmitry Peskov said on Thursday that Moscow “has nothing to do with what is happening on the border of Belarus and Poland.” And on Monday, Peskov said Belarus was taking all necessary measures to act legally.

Russia underlined its support for the Lukashenko regime by performing joint military exercises over Belarus airspace on Wednesday.

Poland’s government ramps up nationalist rhetoric: Polish President Andrzej Duda visited the border late on Thursday in a show of solidarity with the military, police and border guards. Earlier in the day, Duda addressed thousands of Poles who marched through Warsaw to celebrate Independence Day.

In a speech with nationalistic references in support of the government’s strict policy of keeping the border with Belarus closed to migrants, he said: “We have always been, we are and we will be part of a Europe based on Christian values, which are also the foundations of our tradition and culture.”

“The time has come when you need to defend your homeland. But we need to guard its borders more than before,” Duda said, adding: “It must be done with dedication, with sleepless nights, in coldness, in hardship, in a very ungrateful situation to which we were forced by the hybrid actions of the Belarusian regime against Poland and against the European Union.”

Ukraine beefs up its borders: Neighboring Ukraine said it will hold military drills in an area near its borders with Poland and Belarus to counter a potential migrant crisis on Thursday, with some 8,500 servicemen and police expected to participate in the exercises, along with military aircraft, including 15 helicopters.

The US and EU prep new Belarus sanctions: The White House’s National Security Council said Wednesday that the US is preparing “follow-up sanctions” designed to hold Belarusian leaders accountable for “ongoing attacks on democracy, human rights and international norms.” The spokesperson did not specify when the new measures would come into place. This is the second round of sanctions announced by the US in recent months.

Germany’s acting Foreign Minister Heiko Maas told German parliament on Thursday that the EU had decided to “expand and tighten its sanctions against Lukashenko’s regime” at a meeting of foreign ministers in Brussels.